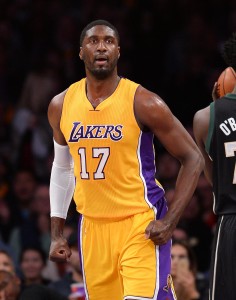 Roy Hibbert was perhaps the NBA’s most renowned defensive player not that long ago. His exploitation of the NBA’s rule allowing defenders to avoid foul calls if they jump straight up, regardless of whether contact occurs, allowed him to become a fearsome rim-protector and the anchor of Pacers teams that seriously threatened the hegemony of LeBron James in the Eastern Conference. The Pacers took the Heat to a seventh game in the 2013 Eastern Conference Finals, and Hibbert, who’d averaged 2.6 blocks per game that season and 17.0 points per game in the playoffs, looked as though he’d fully justified the four-year contract worth more than $58MM that he’d signed with the Pacers the previous summer.

That’s all a memory now with Hibbert in trade rumors for the second time since the end of last season. The Lakers’ experiment with the two-time All-Star hasn’t worked out. The team gives up 6.4 points per 100 possessions when he’s on the floor compared to when he’s not, according to NBA.com. It’s a stat that doesn’t account for the rest of the players he shares the court with, but the margin is wide enough to be instructive. His 2.0 Basketball-Reference Defensive Box Plus Minus rating is his lowest in the past six seasons. Most damning of all is his position as only the 30th-best center in ESPN Defensive Real Plus Minus, where he’s only marginally ahead of Jordan Hill, the undersized big man whom the Lakers let go and whom the Pacers signed a free agent to take some of the minutes that used to go to Hibbert.

It’s puzzling why Hibbert, who’s only 29, simply isn’t the player he used to be. He’s been remarkably durable, having missed only a dozen games since the start of the 2009/10 season before his absence from Monday’s game with a sprained ankle. Perhaps it’s a matter of confidence or mental approach. Hibbert hired a sports psychologist this past summer, though the move evidently hasn’t helped his on-court performance.

Whatever it is, Hibbert’s value clearly isn’t what it used to be. Just what he’ll be able to command on the free agent market this summer, when the soaring cap creates a player-friendly environment for Hibbert and agent David Falk, is a question of its own, but his trade value certainly isn’t high. The Lakers merely had to give up an unprotected 2019 second-round pick when they traded with the Pacers to obtain Hibbert this past summer, though reason exists to believe that was a below-market price. Pacers president of basketball operations Larry Bird and coach Frank Vogel made no secret of the team’s desire to move on from Hibbert in their end-of-season remarks last year, perhaps hurting the team’s bargaining position. Lakers executive VP of basketball operations Jim Buss said that the trade was prearranged before the marquee free agent big men were off the table this summer, so it’s worth wondering if the Pacers would have been able to extract a greater ransom had they waited until starting centers were in greater demand. The Mavs reportedly had interest in Hibbert as a fallback option before DeAndre Jordan‘s temporary commitment to Dallas. For what it’s worth, reports of the Lakers-Pacers trade agreement emerged the day after word of Jordan’s deal with the Mavs did, so the Dallas option likely wasn’t there when the Hibbert swap went down.

What matters now is that the Lakers have reportedly made him available on the trade market and have been trying to see if any playoff-bound teams would be willing takers. It’s unclear what the Lakers would want in return, but any trade involving Hibbert would be a tricky proposition. His salary of more than $15.592MM makes it so. No team, not even the Cavs with their more than $10.5MM trade exception, can absorb him without sending a matching salary back to the Lakers in return, save for the Trail Blazers, who have about $20MM in cap space.

One of Neil Olshey‘s first moves when he became the Portland GM in 2012 was reportedly to propose a max offer to Hibbert, prompting Indiana to sign him for the same terms. Times have clearly changed for both Hibbert and the Trail Blazers, but if Portland, which coincidentally now holds that same 2019 second-rounder the Lakers gave up for Hibbert, were to trade it back to L.A., it would be a relatively low-risk proposition for the Blazers. Portland could see if a revived Hibbert would be able to help the team in its scramble for one of the last playoff spots in the Western Conference, and if not, the Blazers could simply cut ties in the offseason, having done nothing to impinge upon their cap flexibility for the summer. Olshey will no doubt hear other proposals for his team’s giant chunk of cap space between now and the deadline, but Hibbert would seem like a viable option.

Conversely, the Lakers appear to have few alternatives. The Celtics could use a rim-protector, and they’re reportedly working to trade David Lee, whose salary of almost $15.493MM would be a nearly identical match for Hibbert’s. Both are on expiring contracts. However, it’s probably a stretch to think the Lakers would find more value in Lee, who’s fallen out of the rotation for his teams in back-to-back seasons, than they would in Hibbert, who has been the starter for the Lakers all year in spite of his decline. Dallas didn’t wind up with Jordan or Hibbert, their apparent fallback option, and while Zaza Pachulia, the center the Mavs ultimately wound up with, has been a revelation this season, he’s no intimidator in the paint, averaging only 0.3 blocks per game. However, it would be virtually impossible for the Mavs to come up with enough salary to land Hibbert without trading Pachulia and Deron Williams or gutting their core, and Hibbert doesn’t appear to be worth that at this stage of his career.

The Magic don’t have a rim-protector and could use a jolt to stay in contention for a playoff spot, but they’re short on expiring contracts, so the Lakers would have to compromise their cap flexibility going forward to make a reasonable Hibbert trade with Orlando. It’s not as if the Lakers don’t have room to burn, since they only have about $23MM in guaranteed salary for next season, but unless the Magic would be willing to send out some of their intriguing young talent, the Lakers would probably take a pass.

It’s easy for the Lakers to conclude that Hibbert isn’t the long-term answer at starting center, but it would be difficult for the team to gain any assets through an early end to his one-year trial run in that role. Hibbert has expressed frustration with all the losing the 11-42 Lakers have done this season after having been on Pacers teams that were almost always in the playoffs, so it’s conceivable that he’d become a buyout candidate if he remains in purple-and-gold past the deadline. That would give the Lakers reason to hold off on any deal that would represent a net loss either financially or in terms of on-court performance, knowing Hibbert could perhaps be talked into giving back some of his salary in exchange for his release. However, Hibbert said recently that he’s loved his experience with the Lakers so far, according to Mark Medina of the Los Angeles Daily News. In any case, few signs point to Hibbert sticking around. The question is whether he’s gone by the trade deadline, the buyout deadline, or July free agency.

What’s a trade involving Hibbert that would benefit both the Lakers and another team? Leave a comment to share your idea.