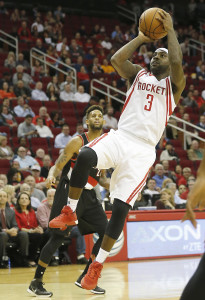 MONDAY, 8:19am: The signing is official, the Pacers announced.

“We’re glad to have Ty come play with the Pacers for this final run of the season,” Pacers president of basketball operations Larry Bird said in the team’s statement. “We think he brings added speed to our backcourt, he can get up and down the floor and he helps strengthen our second unit.”

Lawson, not far removed from having finished third in the league in assists last season, spoke merely of fitting in.

“This is a good opportunity for me to come here, try to help the Pacers win and get into the playoffs,” Lawson said in the statement. “I’m just ready to play and do whatever is needed.”

THURSDAY, 8:51pm: The Pacers have reached an agreement with free agent point guard Ty Lawson, Shams Charania of The Vertical on Yahoo Sports reports. The exact details of the arrangement are not yet known, but it is likely a minimum salary pact that covers the remainder of the season, though that is merely my speculation. The team has about $1.9MM left on its room exception, so it could use that instead of a prorated minimum that would pay Lawson about $300K.

Indiana currently has the league maximum of 15 players on its roster, but the Pacers reportedly have had a buyout arrangement in place with small forward Chase Budinger for a week. The team has held off on finalizing the buyout due to the rash of injuries it has been hit with. Budinger is expected to be waived on Saturday, which is also when Lawson is expected to officially sign, Charania notes.

Lawson was never a good fit with the Rockets this year, prompting him and the team to reach a buyout arrangement prior to the March 1st deadline for players to hit waivers and retain postseason eligibility for other teams. In 53 appearances for Houston this season, Lawson averaged 5.8 points, 1.7 rebounds and 3.4 assists in 22.2 minutes per night. His shooting line is .387/.330/.700.