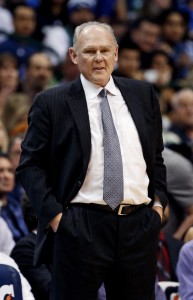 THURSDAY, 12:41pm: The Kings have fired Karl, the team announced.

“After evaluating the team’s performance this season, I determined it was necessary to move forward with a new voice from the head coaching position,” Divac said in the team’s statement. “I have a great deal of respect and admiration for George and his accomplishments throughout his nearly 30 years in the NBA. On behalf of everyone in the Kings organization, I thank him for the contributions made during his time in Sacramento and wish him good fortune in the future.”

11:43am: Karl, who’ll coach the team against Houston tonight, is aware of the team’s plan to fire him Thursday, sources told Adrian Wojnarowski of The Vertical, who adds that Divac and ownership came to the decision jointly.

WEDNESDAY, 10:53am: The Kings plan to fire George Karl on Thursday, multiple league sources indicated to Jason Jones of The Sacramento Bee, who relays the news in the middle of a blog entry. The news comes as no shock, as The Bee’s Ailene Voisin wrote in March that the overwhelming sense in the Kings organization was that Karl would soon be gone, shortly after The Vertical’s Adrian Wojnarowski said the Kings didn’t appear to want the coach beyond season’s end. Karl nearly lost his job in February before the team apparently changed course. Questions surrounding the coach’s job security emerged as early as last June, just four months after the team hired him, and his tumultuous relationship with DeMarcus Cousins has been a matter of close scrutiny.

The front office failed to tell Karl the team’s top players wouldn’t be going on the team’s season-ending road trip, according to Jones. That’s the latest example of a disconnect between the coach and the team. Karl and GM Vlade Divac‘s front office have struggled to communicate, as Jones details, pointing to Divac’s dismissal of assistant coach Vance Walberg in February and the GM’s refusal to suspend Cousins for his tirade against the coach in November. The team later suspended Cousins for one game after another tirade in March. Players didn’t trust Karl’s defensive game-planning and lacked direction on offense while privately complaining that Karl didn’t hold the team’s stars accountable, Jones writes.

Sacramento has a record of 33-48 this season heading into tonight’s final regular season game and 44-67 overall since Karl took the coaching reigns in February 2015. The team entered this season with playoff aspirations after a summer in which it acquired several veterans, including Rajon Rondo, but Karl is the eighth consecutive Kings coach to have failed to take the team to the postseason.

Sacramento will be on the hook for the $6.5MM that remains on Karl’s contract. His salary for this season is $3.25MM, and it appeared as though that was a stumbling block to a dismissal earlier this season, with Kings minority-share owners reluctant to shell out money for a coach who would no longer be with the team.

The most significant controversies surrounding Karl had to do with Cousins. The coach reportedly negotiated potential trades involving Cousins this past summer behind the back of Divac, whom the Kings hired shortly after Karl arrived. That prompted Cousins to express his displeasure via social media, and while the sides appeared to patch up their differences heading into the season, Cousins continued to appear distrustful of the coach.