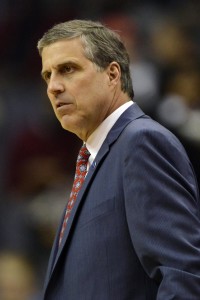 THURSDAY, 8:04am: The firing is official, the Wizards announced.

“There were high internal and external expectations for this team coming into this season based on the momentum we had generated over the previous two years,” Wizards president Ernie Grunfeld said in the team’s statement. “Unfortunately, the inconsistency of the team’s performance and effort, particularly on our home court, did not allow us to meet those expectations and we decided a coaching change was needed.”

Grunfeld nonetheless complimented Wittman on the way out, as the statement conveys.

“Randy should be commended for the job he did in taking over as head coach during a very difficult time for our franchise and for helping to establish a culture and identity that led to success,” Grunfeld said. “This was a very tough decision on a personal level, and we wish Randy and his family the best moving forward.”

11:37pm: The team is prioritizing experience and defense, according to Michael, who casts doubt on D’Antoni’s candidacy (Twitter links). Michael initially referred to Brooks and Tom Thibodeau as the top candidates but followed up minutes later to say Thibodeau is not a serious candidate.

11:28pm: The Wizards are also interested in Sixers assistant Mike D’Antoni, Wojnarowski reports. The team thought about going after Brooks at midseason, and they plan to aggressively court him now, Wojnarowski hears. Brooks is fond of D.C., Zillgitt notes (Twitter link), though he’s a candidate for the Timberwolves and Rockets and is believed to be waiting to see what the Lakers do with Byron Scott, Wojnarowski adds.

11:18pm: The firing has taken place, sources tell Stein (Twitter link), and the Wizards have informed Wittman of his fate, a league source tells The Vertical’s Adrian Wojnarowski (Twitter link), though the team has yet to make any official announcement.

WEDNESDAY, 10:36pm: The Wizards will fire coach Randy Wittman, a source tells Jorge Castillo of The Washington Post (Twitter link). Scott Brooks and Jeff Hornacek are strong candidates to replace him, as The Vertical’s Adrian Wojnarowski hears. (Twitter links). Monty Williams is another name to watch, given his roots in the Washington, D.C. area and his ties to free agent target and D.C. native Kevin Durant, tweets Jeff Zillgitt of USA Today.

The news about Wittman comes as no shock, as reports throughout Wednesday signaled the move would happen. Michael Scotto of SheridanHoops reported earlier this month that Wittman wasn’t expected to remain. Washington will eat the partial guarantee, of an unknown amount, on the final season of Wittman’s contract, which paid him more than $3MM a year.

Washington finished 41-41 this season but missed the playoffs. Wittman guided the Wizards to back-to-back appearances in the second round of the playoffs the past two years, the first such accomplishment for the franchise since it made consecutive trips to the NBA finals in 1978 and 1979. However, a shift to a more perimeter-oriented attack this season fell flat, and multiple players publicly criticized the coach. It went both ways, as Marcin Gortat stewed for months after Wittman criticized his lack of rebounding after a game in November, according to J. Michael of CSN Mid-Atlantic, who wrote recently that the coach’s relationship with the players had deteriorated this season.

Wittman will finish 178-199 as coach of the Wizards, a tenure that spanned parts of five seasons. He replaced Flip Saunders in the middle of the lockout-shortened 2011/12 campaign.