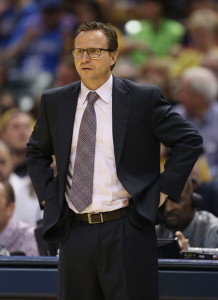 The Wizards have officially announced the hiring of Scott Brooks as the team’s new head coach, confirming an April 21st report from Adrian Wojnarowski of The Vertical that they had an agreement in principle (via Twitter). It’s a five-year arrangement that will pay Brooks approximately $7MM per season, according to Wojnarowski.

“Scott’s approach to the game, track record for player development and ability to communicate with his players made him the clear-cut choice to guide our team as we continue to rise as contenders in the Eastern Conference,” owner Ted Leonsis said in the team’s statement. “His accomplishments as a coach are matched only by his sterling reputation around the league and we’re confident that our fans and players alike will embrace and support him as he leads the way.”

In seven seasons as an NBA coach, all with Oklahoma City, Brooks has a regular season record of 338-207. His career postseason mark is 39-34.

Though a lag of several days took place between the reported agreement and the signing, there was apparently a time element involved in the negotiations, with Washington wanting to secure Brooks prior to the Rockets post opening up, according to Marc Stein of ESPN.com. Brooks and Jeff Van Gundy were the reported co-favorites for Houston’s head coaching job. The Wizards and Brooks simply decided to take their time once the agreement was in place, tweets Jorge Castillo of The Washington Post, indicating that they didn’t hit any sort of snag.

“Scott was our top candidate and we moved quickly on an agreement to make him our head coach,” Wizards president Ernie Grunfeld said in the statement. “His presence, the core players we have returning and our cap flexibility this summer have us all looking forward to the possibilities of what our team can accomplish.”

The Rockets still haven’t officially decided the fate of interim coach J.B. Bickerstaff, who reportedly enhanced his chances of keeping the job when the team clinched a playoff berth on the final night of the regular season, but the latest reports appear to cast significant doubt on his return. Brooks was reportedly wary of the uncertainty surrounding Dwight Howard‘s player option, as Ken Berger of CBSSports.com noted, even though Howard has long been expected to opt out. Stein reported earlier that the Rockets were second only to the Wizards among the options Brooks was considering but pointed to Houston’s focus on the playoffs as a disadvantage.

“I am beyond thrilled to return to coaching with a team that is filled with such potential and to be able to join an organization that is committed to helping us reach our goals,” Brooks said, according to the statement. “I’m very grateful to Ted Leonsis and Ernie Grunfeld for this opportunity and I can promise the great fans of Washington that we will work extremely hard both on and off the court to represent them in a manner fitting the most powerful city in the world.”

The hiring of Brooks is especially interesting given the looming unrestricted free agency of Kevin Durant, whom Brooks coached in Oklahoma City. Durant, who is from Washington, D.C., is almost assuredly going to be the franchise’s top priority this offseason, though reports have downplayed the idea that the Brooks hiring will be nearly enough to reel in the free agent prize.

Washington finished 41-41 this season but missed the playoffs. Former coach Randy Wittman guided the Wizards to back-to-back appearances in the second round of the playoffs the past two years, the first such accomplishment for the franchise since it made consecutive trips to the NBA finals in 1978 and 1979. However, a shift to a more perimeter-oriented attack this season fell flat, and multiple players publicly criticized the coach. These factors led to Wittman’s dismissal last week.