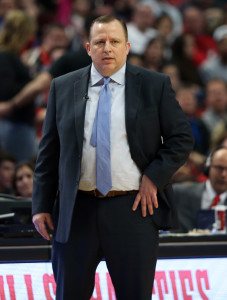 5:51pm: The Wolves have officially announced the hiring of Thibodeau and Layden. “We are extremely excited to welcome Tom Thibodeau back to the Timberwolves,” team owner Glen Taylor said. “Through this process we quickly identified Tom as the best leader to shape our talented team and help them realize their full potential. Tom’s resume speaks for itself. He is a proven winner, leader, and one of the most well-respected NBA head coaches over the last decade. His teams have annually been among the league leaders in defense and we are excited about the approach and mentality he will bring to that side of the ball. The future of the Minnesota Timberwolves has never been brighter and we are very pleased to have Tom as our basketball operations leader moving forward.”

Regarding Layden, Taylor said, “Scott Layden brings over 30 years of experience in the NBA to his new role within our organization, including several years in basketball operations leadership positions with Utah, New York and most recently San Antonio. His decades of front office experience will be integral as we head into an extremely exciting time for our organization. In getting to know Scott, he has impressed me with his not only basketball acumen, but also his character and integrity. Tom and Scott will work in concert together in shaping our roster moving forward. We are confident this partnership gives us the best possible chance of winning an NBA title.”

5:13 pm: The Wolves and Tom Thibodeau have reached an agreement that will make him the team’s head coach and president of basketball operations, reports Jon Krawczynski of The Associated Press (via Twitter). The pact will pay Thibodeau approximately $8MM per season over five years, according to Marc Stein of ESPN.com (Twitter link). Adrian Wojnarowski of The Vertical first reported that the two sides were closing in on an agreement.

Spurs assistant GM Scott Layden is set to become Minnesota’s GM and will earn approximately $2MM per season, according to Stein. Layden had spoken with the Wolves within the past few days about assuming the role of GM in a Thibodeau-led front office, according to Wojnarowski. The executive has previously served as the primary basketball executive of the Jazz, from 1992-99, before moving on to the Knicks from 1999-2003. He returned to the Jazz and spent several years as an assistant coach before the Spurs hired him in September 2012.

Minnesota had also reportedly interviewed Jeff Van Gundy for the coach/executive post that Thibodeau landed, and Mark Jackson apparently interviewed for the coaching job Tuesday. Thibodeau has nonetheless been the leading candidate throughout the team’s search and people around the league believed it was inevitable that the Wolves would hire him, according to Krawczynski. Gery Woelfel of The Journal Times reported earlier this week that people around the league were convinced Thibodeau would end up in Minnesota, where he still feels a comfort from his time as an assistant coach there from 1989-91, according to Marc Berman of the New York Post.

Thibodeau had plenty of on-court success in his five seasons with the Bulls, who had given the longtime assistant his first NBA head coaching job. He went 255-139 in the regular season, winning the 2010 Coach of the Year award, though he was just 23-28 in the playoffs. Chicago parted ways with Thibodeau last May.