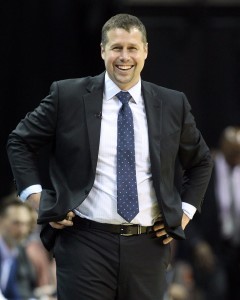 3:30pm: The hiring is official, the team announced.

“I am thrilled to welcome Dave to the Sacramento Kings,” Divac said. “He is a strong and passionate leader with a proven track record of producing results. Dave shares our focus on creating a long-term culture of winning and I look forward to a bright future ahead for the Kings with his leadership on the court.”

1:22pm: The Kings and Dave Joerger have struck agreement on a four-year deal worth $16MM that will make him the team’s head coach, reports Adrian Wojnarowski of The Vertical (Twitter links). The fourth season will be a team option, Wojnarowski adds. Sacramento had hoped to come to terms today on that very contract structure, as Wojnarowski reported just minutes ago. Marc Stein of ESPN.com first reported the framework of a four-year arrangement with a team option, and Wojnarowski first reported that Sacramento had Joerger atop its wish list in the wake of the Grizzlies’ decision to fire him Saturday.

Joerger and the Kings moved quickly, as the coach met with GM Vlade Divac on Sunday and did the same with owner Vivek Ranadive today, Wojnarowski notes. The Kings had reportedly been telling other candidates that they’d wait to speak again with three finalists in the coming days, but apparently the prospect of securing Joerger proved too tempting. The ex-Memphis coach had planned to wait to hear from the Rockets, with whom he reportedly held mutual interest, but it’s unclear if Joerger and Houston ever touched base.

The 42-year-old Joerger is expected to bring Grizzlies assistant Elston Turner with him to Sacramento and is likely to hire veteran NBA and college assistant Bill Bayno for the staff, too, according to Wojnarowski. Turner is one of a lengthy list of names attached to the Kings job over the past few weeks, though it wasn’t clear whether he was indeed a head coaching candidate or merely an assistant coaching option all along.

Joerger carries a 147-99 regular season record and a 9-13 postseason mark to Sacramento from his time with Memphis, but he’ll be hard-pressed to duplicate that sort of success for the Kings, who haven’t made the postseason since 2006. He’ll be Sacramento’s ninth coach since the team fired Rick Adelman after that playoff run, and the sixth who’ll try to get the most out of talented but fiery superstar DeMarcus Cousins, assuming the Kings don’t trade the big man this summer. Divac is reportedly willing to gauge the market for Cousins in the months ahead.