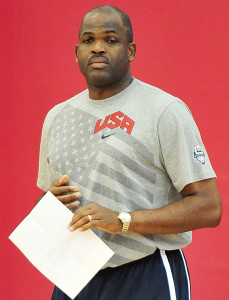 12:38pm: McMillan signed a three-year contract with the Pacers, league sources tell Adrian Wojnarowski of The Vertical (Twitter link). There are no options included in the deal.

11:55am: In advance of their formal news conference today, the Pacers have confirmed in a press release that Nate McMillan has been hired as the team’s new head coach. McMillan, who has been an assistant with the team since 2013, replaces Frank Vogel, who was let go on May 5th.

Adrian Wojnarowski of The Vertical first reported on Saturday that the Pacers were putting the final touches on a deal to promote McMillan to the head coaching job. According to Wojnarowski, Pacers officials offered McMillan the job during his interview late last week.

“I truly believe Nate is the right coach for us at this time,” Pacers President of Basketball Operations Larry Bird said in a statement on Monday. “When I heard he was interested, I got in touch with him, met with him and in our conversation I came away with all the confidence in the world in Nate to lead our franchise to where we want to go. His experience as a player, head coach and assistant coach in the NBA are valuable assets for us.”

This will be the third NBA head coaching job for McMillan, who spent nearly five seasons as the coach in Seattle and six and a half with Portland. He has a 478-452 career record, along with five playoff appearances.

The Pacers considered several former NBA coaches and current assistants before deciding on the 51-year-old McMillan. He was also reported to be a finalist for the Kings job that went to Dave Joerger and was listed as a possible candidate for the Wizards’ opening before they hired Scott Brooks.