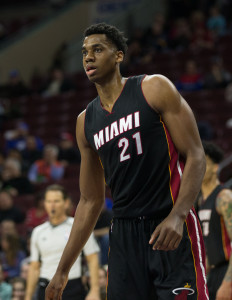 July 7th, 4:55pm: The deal is official, the Heat announced via press release.

8:12am: As expected, Whiteside’s pact is a four-year, maximum salary contract, Jason Lieser of The Palm Beach Post tweets.

JULY 1st, 6:59am: Unrestricted free agent Hassan Whiteside has decided to remain in Miami and will re-sign with the Heat, he announced via a post in The Player’s Tribune. The agreed upon terms were not announced, but Whiteside was reportedly seeking a maximum salary offer.

“I’ve played on eight teams since college — from Reno to Sioux Falls to Sichuan, China,” Whiteside wrote in his announcement. “I am not ready for there to be a ninth. I have decided to re-sign with Miami. I just wanted to take this time to tell all the fans how much you mean to this team, and to me. Can’t wait to get back to work and try to bring another championship to Miami. #HeatNation”

The Heat and Mavericks both had the opportunity to make pitches to Whiteside in the early hours of free agency, and the free agent big man left both meetings without an agreement in place, relaying that he would make his final decision this morning. Heading into those early morning meetings, the Mavs were the reported favorites, but ultimately Pat Riley convinced the big man that Miami was the best spot for him to continue his playing career. Portland was also reported to have scheduled a meeting, but it appears the Blazers never had the opportunity to sit down with Whiteside.

For Dallas, this becomes another big name free agent that has spurned the organization, and the second offseason in a row that Mark Cuban and company failed to land their top target. While there was no bizarre stand-off at Whiteside’s home similar to what occurred last summer with DeAndre Jordan, losing out on the big man has to sting. The team will need to regroup and hope it has better luck with point guard Mike Conley, who is reportedly the team’s other free agent priority.