THURSDAY, 1:05pm: The Pacers have officially confirmed the trade, announcing in a press release that they’ll receive Evans, cash considerations, and the rights to Emir Preldzic from the Mavericks in exchange for the rights to Stanko Barac.

WEDNESDAY, 11:57am: The Mavericks and Pacers are finalizing an agreement on a trade that will send Jeremy Evans and cash to Indiana, according to Adrian Wojnarowski of The Vertical (Twitter links). ESPN’s Marc Stein first reported on Tuesday that Dallas was “increasingly likely” to move Evans and his $1,227,286 salary to free up a little extra cap room. 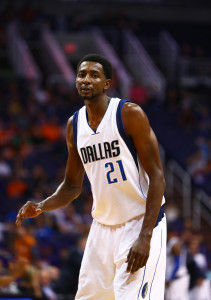 Evans, 28, appeared in 30 contests for Dallas this past season, including two starts. The veteran forward only played 8.4 minutes per contest, averaging 2.4 points, 1.8 rebounds, and 0.3 blocks to accompany a shooting line of .542/.250/.714. He had season-ending surgery on a torn labrum in March.

The Pacers almost certainly aren’t counting on Evans to have a major role in their rotation, but he could help provide some depth at small forward, with Solomon Hill headed to New Orleans in free agency. With Hill, Ian Mahinmi, and potentially Jordan Hill all potentially ticketed for new homes, Indiana has done a nice job replenishing its frontcourt this offseason, adding Al Jefferson and Thaddeus Young, along with Evans.

As for the Mavericks, the contracts and trades they’ve agreed to this July had them just slightly over their available cap room, based on the reported salary figures. So it makes sense that the team would look to move Evans to create a little extra flexibility to fit all those deals. Dallas also may trade or waive JaVale McGee before his 2016/17 salary becomes guaranteed next week.