JULY 13, 10:15pm: The Nets have officially signed Vasquez, the team announced today in a press release. 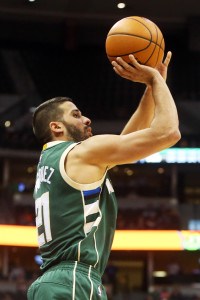 JULY 10, 8:56pm: Greivis Vasquez has agreed to a one-year deal with the Nets, tweets The Vertical’s Adrian Wojnarowski. Vasquez missed most of the 2015/16 season after undergoing surgery on his right ankle in December.

Vasquez appeared in 29 games for the Bucks this year, all as a reserve. He averaged 5.7 points and 4.0 assists in 20.0 minutes of playing time. Vasquez has also been with the Grizzlies, Hornets, Kings and Raptors during his six seasons in the NBA.

He joins a Brooklyn team that also added point guard Jeremy Lin through free agency and may be seeking more backcourt help after offer sheets to Allen Crabbe and Tyler Johnson were matched earlier today.