JULY 21st: The deal is official, the team announced via press release.

JULY 1st: The Pelicans have reached an agreement with free agent guard E’Twaun Moore, reports Scott Kushner of The Advocate (Twitter link). According to Kushner, Moore will sign a four-year, $34MM deal with New Orleans when the July moratorium ends. The deal won’t include any option years, Kushner adds (via Twitter). 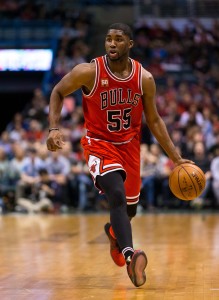 In recent days, the Pelicans have been linked to several guards and wings, including Evan Turner, Jeremy Lin, and Tyler Johnson, among others. The team has now added a player at both positions — after reaching an agreement with forward Solomon Hill earlier today, they’ve now struck a deal with Moore, a combo guard.

Moore, 27, started a career-high 22 games for the Bulls, and was solid in that role, averaging 12.0 points, 3.0 rebounds, and 3.0 assists in his starts, while shooting 46.2% on three-pointers. He’ll probably be a bench option in New Orleans, but the Pelicans front office is high on Moore, who met with GM Dell Demps today, per Kushner (Twitter link).

The Wolves were among the other teams to reach out to Moore today, though the Bulls had been viewed as the favorites to retain him until the Pelicans swooped in with a four-year offer.