JULY 14, 4:57pm: Stein has amended his report, tweeting that New Orleans and Jones have agreed to a one-year deal at the minimum salary. The Pelicans are trying to create a bit more cap room, so Jones may see that salary increase, Stein adds.

4:43pm: Jones has at least one offer on the table that will pay him more than the Pelicans offered, Marc Stein of ESPN.com tweets. New Orleans is still hopeful of landing the forward, Stein adds. Charania has a different take, tweeting that Jones and the Pelicans are in the process of finalizing a deal.

12:26am: The Pelicans are nearing a deal with free agent power forward Terrence Jones, according to Shams Charania of The Vertical (via Twitter). Charania reports that New Orleans is expected to sign Jones to a one-year contract. 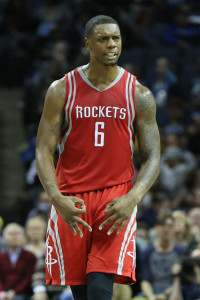 Jones, 24, had an impressive sophomore season for the Rockets back in 2013/14, starting 71 of his 76 games played, and averaging 12.1 PPG, 6.9 RPG, and 1.3 BPG to go along with a .542 FG%. Since then, however, he has battled injuries and his production has been inconsistent. Jones had been eligible for restricted free agency this summer, but Houston opted not to extend him a qualifying offer, allowing him to hit the open market as an unrestricted free agent.

The Pelicans haven’t made a huge splash in free agency this summer, but the team has been steadily adding solid rotation pieces to its roster. New Orleans has previously reached agreements with Solomon Hill, E’Twaun Moore, Langston Galloway, and Tim Frazier.

Jones has likely received interest from teams interested in locking him up for more than one season, but given his up-and-down performance over the last two seasons, it makes sense that he’d be looking to rebuild his value on a one-year contract. If he has a strong year with the Pelicans, the Kentucky product could parlay that showing into a longer-term – and more lucrative – deal in free agency next summer.