The Rockets and Eric Gordon have reached an agreement, Adrian Wojnarowski of The Vertical reports. The deal, which can be finalized next week, is worth $53MM over four years, Wojnarowski adds. 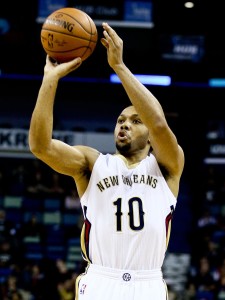 Gordon, 27, is a talented scorer when he’s healthy, having averaged 16.6 PPG with a .383 3PT% over the course of his eight-year NBA career. However, in those eight seasons, he has played just 417 total games, or about 52 per year. During his five seasons in New Orleans, Gordon never played more than 64 games in a season, having dealt with multiple injuries. Gordon averaged 15.2 points in 45 games for the Pelicans last season.

It’s quite clear that the Rockets are building around James Harden as an offensive-minded team under new coach Mike D’Antoni. Houston agreed to a deal with stretch four Ryan Anderson earlier on Saturday. Gordon and Anderson had been teammates with the Pelicans.

The lack of state income tax in Texas may have been an added incentive for Gordon, who also received interest from the Knicks and Grizzlies. New York ultimately reached a deal with Courtney Lee to fill the club’s opening at the two.