JULY 8th, 5:01pm: The Suns announced that the signing is official.

JULY 1st, 9:14pm: After spending four years in Phoenix earlier in his NBA career, Jared Dudley is returning to the Suns. According to John Gambadoro of Arizona Sports 98.7 (Twitter link), the Suns and Dudley have reached an agreement on a three-year, $30MM deal. The pact will be fully guaranteed, tweets Michael Scotto of The Associated Press. 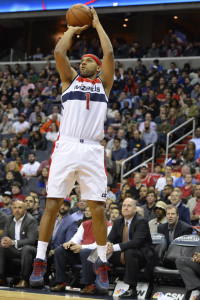 Dudley, who will turn 31 later this month, was one of the more talented outside shooters available in free agency this summer. For his career, Dudley has made more than 700 three-pointers, shooting at a 39.9% clip. He made 42.0% of his shots from downtown this past season for the Wizards, averaging at least one three-pointer per game for the seventh straight year.

While Washington reportedly had interest in re-signing Dudley, Phoenix’s primary competitors for the veteran’s services appeared to be the Nets and the Jazz. Brooklyn reportedly made a two-year, $18MM offer to Dudley, while Utah spoke to him multiple times.

For the Suns, Dudley will provide a young team with veteran leadership, and will help make up for some of the outside shooting that was lost when Mirza Teletovic reached an agreement with the Bucks.