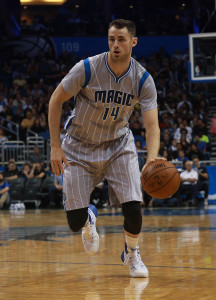 The Wizards and unrestricted free agent Jason Smith have agreed to a deal, Shams Charania of The Vertical reports (via Twitter). It will be a three-year, $16MM pact, J. Michael of CSNMidAtlantic.com tweets. Smith has a player option for the final season, Michael adds.

In Smith, Washington adds a big man capable of stretching the floor with his shooting when he’s on, though the former No. 20 overall pick (2007, Miami) only owns a career mark of .293 from beyond the arc. His most successful campaign from deep was the 2014/15 season when he nailed 35.7% of his threes for the Knicks. But Smith is certainly a solid addition as a role-player, with Smith set to compete against Andrew Nicholson and Drew Gooden for minutes off the bench next season.