SEPTEMBER 8: The Pacers have formally issued a press release announcing their deal with Seraphin. Within the release, Indiana also officially confirmed the previously-reported signing of Nick Zeisloft. 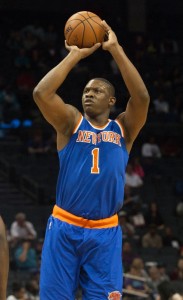 SEPTEMBER 2: Kevin Seraphin will join the Pacers on a two-year, $3.6MM contract, reports Shams Charania of The Vertical. The deal includes a team option for the second season, sources tell Charania.

Seraphin held workouts for Indiana officials Monday and Tuesday, and the agreement was finalized late Thursday night. The 6’10” center/power forward is expected to sign it sometime next week.

After five years with the Wizards, Seraphin spent last season with the Knicks, averaging 3.9 points and 2.6 rebounds per night in 48 games. The Pacers will count on him to provide depth in the front court behind Myles Turner and free agent addition Al Jefferson.