FEBRUARY 20: The trade is official, according to press release issued by the Kings and Pelicans. Sacramento has waived Matt Barnes to clear room for the extra incoming player. 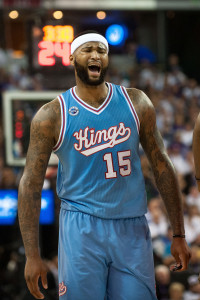 “It was time for a change and I decided this was the best direction for the organization,” Kings GM Vlade Divac said in a statement. “Winning begins with culture and character matters. With the upcoming draft class set to be one of the strongest in a decade, this trade will allow us to build the depth needed for a talented and developing roster moving forward. We thank DeMarcus for his contributions and wish him all the best in New Orleans. The fans in Sacramento are the best in the world and we are all committed to building a team that will continue to make Sacramento proud.”

For more notes, reactions, and details on the deal, check out our posts from earlier today, plus our initial Sunday report below.

FEBRUARY 19: After publicly vowing earlier this season that he wouldn’t be moved, the Kings have agreed to trade DeMarcus Cousins to the Pelicans, according to Adrian Wojnarowski of The Vertical.

Michael Scotto of Basketball Insiders tweets that the deal consists of Buddy Hield, Tyreke Evans, Langston Galloway, New Orleans’ 2017 first-round pick (top-three protected), and Philadelphia’s 2017 second-round pick going to Sacramento, with Cousins and Omri Casspi heading to New Orleans. David Aldridge of TNT (Twitter link) initially reported that the Kings would also get a 2019 first-rounder, but he has since issued a correction, tweeting that New Orleans balked at the Kings’ request to include that pick.

Earlier this evening, news broke that the Kings and Pelicans had engaged in discussions about a possible Cousins deal. At the time, it was reported by Scotto that the standout center could potentially be shipped to New Orleans in exchange for a package involving Hield, a 2017 first-round pick and an additional first-round pick. Later, in an article published at The Vertical, Wojnarowski suggested that expiring contracts could also be involved.

Following the first report, Wojnarowski tweeted that Kings general manager Vlade Divac had formally presented what the front office believed to be the two best trade proposals to team owner Vivek Ranadive. Previously, despite concerns throughout the organization about Cousins’ temperament, Ranadive was intent on holding onto the franchise pillar, and Divac had publicly reiterated that stance.

For the Kings, it’s an abrupt about-face, and it’s fair to wonder if Divac’s public and private declarations that Cousins wouldn’t be moved will hurt his credibility with agents and players in the future, as Wojnarowski tweets.

Over the last several hours, other teams, including the Suns and Lakers, were linked to the Kings’ Cousins talks, though the discussions with New Orleans were viewed as the most serious. According to Wojnarowski (Twitter links), the Lakers balked at Sacramento’s asking price and opted against including Brandon Ingram in a package.

Ultimately, the Kings aren’t getting a massive haul in return for their All-NBA big man, though it’s worth noting that several pre-draft reports back in June indicated that the team was very high on Hield. Still, it’s surprising that the former Oklahoma sharpshooter and a draft pick that may not even end up in the lottery are the centerpieces of a Cousins deal. Howard Beck of Bleacher Report tweets there wasn’t much of a market for the All-Star big man, according to several executives.

The deal also isn’t necessarily great news for Cousins, who will now be ineligible to receive a Designated Veteran Extension this summer. The 26-year-old would have met the criteria for a new deal worth 35% of the cap if he remained in Sacramento, and there were indications in recent weeks that both sides were on board with the idea of getting something done. Now that he’s changing teams, Cousins will be eligible for a far more modest extension.

Cousins’ agent Jarinn Akana suggested earlier today that his client wasn’t likely to sign an extension this summer with any team that traded for him, as ESPN’s Marc Stein reported (Twitter links). However, that could have been a negotiating tactic — if teams were worried about their ability to re-sign Cousins, they may have been reluctant to trade for him, in which case he would’ve remained with the Kings and been eligible for a super-max deal. For what it’s worth, Ramona Shelburne of ESPN tweets that the Pelicans are confident that they can ultimately lock up Cousins to a new contract. If New Orleans can’t extend Cousins prior to free agency, he’ll hit the open market in 2018.

In recent weeks, the Pelicans had been linked to centers such as Jahlil Okafor and Brook Lopez as they dangled a first-round pick in an effort to find a frontcourt partner for Anthony Davis. The team had reportedly been offering its 2018 pick, having been reluctant to move its first-rounder in 2017, given this year’s strong draft class. However, it makes sense that New Orleans was willing to change course for a player of Cousins’ caliber.

With Cousins and Davis in the frontcourt, the Pelicans will feature two of the league’s very best big men. Cousins, who was named to the All-NBA second team last year, has arguably been even better in 2016/17, averaging a career-high 27.8 PPG to go along with 10.7 RPG and 4.9 APG. His presence on the Pelicans’ roster may have an impact on Jrue Holiday‘s decision in free agency this summer. Holiday is on an expiring deal, but Davis has been lobbying the veteran point guard to re-sign with New Orleans.

This move will also have draft-related ramifications for the Sixers and Bulls. Chicago had been in line to receive Sacramento’s first-round pick in 2017 if it fell outside of the top 10. With Cousins no longer on their roster though, the Kings seem likely to slip in the standings, which is bad news for the Bulls. Chicago will receive a 2017 second-rounder from the Kings if Sacramento’s first-rounder falls in the top 10.

As for the Sixers, they’ll have the option to swap first-round picks with Sacramento if the Kings retain their selection. As our 2016/17 Reverse Standings show, Philadelphia currently has the league’s fifth-worst record, while the Kings rank 11th, but things are tight enough that those spots could flip quickly.

For the deal to become official, the Kings will have to remove at least one more player from their roster, via release or trade. The team is also considered likely to waive Galloway after acquiring him, per Wojnarowski (via Twitter). The third-year guard needed to be included in the swap for salary-matching purposes.

In other cap-related housekeeping notes, Evans’ deal includes a 15% trade kicker, which will add an extra $458K to his salary. The Pelicans will pay that trade bonus, though it will be charged to Sacramento’s cap. Each team will create a modest trade exception in the deal as well — the Kings’ TPE should be worth Casspi’s salary ($2.963MM), while the Pelicans’ TPE should be worth Hield’s salary ($3.517MM)