MARCH 30, 2:31pm: The Pacers have officially signed Stephenson, the team announced today in a press release. 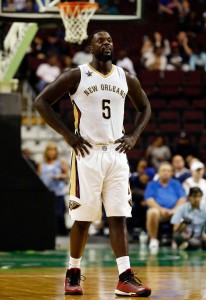 “We’re very happy to have Lance back as part of our team,” Pacers president of basketball operations Larry Bird said in a statement. “We always knew he wanted to come back here, and we feel now is the right time, not only for the rest of this season, but moving forward. We look forward to having a long relationship with him, because we know what he can bring to our franchise, both on and off the court.”

MARCH 29, 11:54am: The Pacers and Stephenson are in agreement on a three-year, $12MM deal, reports Chris Haynes of ESPN.com (via Twitter). According to Haynes, the first two years are guaranteed, while the third is a team option. Adam Zagoria was the first to report the agreement between the two sides, as noted below.

11:35am: The Pacers are working on a deal to bring Lance Stephenson back to Indiana, league sources tell Adrian Wojnarowski of The Vertical (Twitter link). Adam Zagoria of ZagsBlog indicates that the two sides have already finalized a three-year deal with a player option in year three, though the team has yet to confirm anything.

The Pacers opened up a spot on their roster today when they waived veteran guard Rodney Stuckey. With Al Jefferson and Glenn Robinson III also on the shelf, Indiana has some holes in its rotation, opening the door for a player like Stephenson to return to the club. While the coaching staff isn’t the same one that worked with Stephenson during his first stint with the Pacers, the front office is familiar with him.

Stephenson, 26, enjoyed a breakout season for the Pacers in 2013/14, averaging 13.8 PPG, 7.2 RPG, and 4.6 APG. However, he has bounced around the league since then and hasn’t delivered on the promise he showed during his final year in Indiana.

After playing for the Hornets, Clippers, and Grizzlies in previous years, Stephenson started this season with the Pelicans, but was waived after suffering a groin injury. The veteran swingman later caught on with the Timberwolves on a pair of 10-day deals, though his stint in Minnesota was derailed by injuries as well. As of mid-March, the Wolves were willing to let him go as he continued to deal with an ankle issue.

Assuming the Pacers and Stephenson do finalize a multiyear deal, the Pacers have the flexibility to offer more than two years and more than the minimum salary, since they remain under the cap. As our Salary Cap Snapshot shows, Indiana has more than $4MM in cap room available. Typically, veteran free agents who sign late in the season prefer one-year contracts so that they can return to the open market in the summer, but that extra cap space gives the Pacers the flexibility to make a multiyear deal worth Stephenson’s while.

Although Stephenson signed with the Wolves after March 1, he’ll retain his playoff eligibility for Indiana, since his deal with Minnesota was a 10-day pact.