We’re keeping things going today with the award for Sixth Man of the Year. Here are our picks: 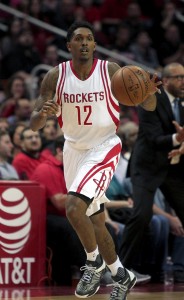 The league’s MVP may be the only award race that’s tighter than the Sixth Man of the Year’s. Eric Gordon had an excellent debut season before cooling off in the second half. James Johnson breathed life into Miami after the team was decimated by injuries. Andre Iguodala held down the second unit of 67-win team. Zach Randolph gave the Grizzlies firepower off the bench where they didn’t have very much else to count on.

Yet, Williams stands out. The 2014/15 Sixth Man of the Year scored 17.5 PPG this season while sporting a career-high 21.4 PER. He had a true shooting percentage of .609 during his 58 games in Los Angeles. His numbers dipped after he was sent to the Rockets at the trade deadline, but he remained a key contributor in Houston, scoring the second-most points per game on the team after the All-Star break. There were plenty of great options off the bench this season, but Williams gets my vote for the best of the bunch.

Dana Gauruder: Lou Williams (Lakers/Rockets)
Williams was so effective off the bench for the going-nowhere Lakers that he got himself traded to a contender. He’s been in the league since 2005/06 and averaged a career high 17.5 points. Williams’ perimeter shooting cooled off after joining the Rockets but he makes them that much more dangerous in the postseason.

Arthur Hill: Eric Gordon (Rockets)
Ever since James Harden arrived in Houston, the Rockets have struggled to score when he’s not in the game. The franchise has been searching for years for a guard who can put pressure on opposing defenses while Harden is resting. They struck gold last summer when Gordon agreed to a four-year, $53MM deal. Gordon shook off his long history of injuries and played 75 games, the most since his rookie season, while averaging 16.3 points per night and shooting 37% from 3-point range. His stats alone make him worthy of the Sixth Man award, but his impact on the Rockets has been even greater.

Luke Adams: James Johnson (Heat)
Players like Williams and Gordon fit the mold of a traditional Sixth Man of the Year as second-unit scorers capable of changing games and single-handedly keeping an offense afloat when the starters get some rest. But Johnson’s all-around play on both ends of the floor was game-changing during the Heat’s 30-11 second-half run.

Always an intriguing part-time player, Johnson finally put it all together this season in Miami, scoring (12.8 PPG), passing (3.6 APG), and shooting (.341 FG%) at career-best rates. Most impressively, he showed the ability to guard virtually anyone on an opponent’s roster, one through five, averaging more than a block and a steal per game while maintaining that invaluable versatility.

Austin Kent: Zach Randolph (Grizzlies)
The decision to bump 35-year-old Randolph to the second unit paid off for the Grizzlies and the veteran’s 15th NBA season will go down as one of his most efficient on a per-minute basis. In just over 24 minutes per game, Randolph averaged 14.1 points and 8.2 rebounds, all while playing a vital role in keeping Memphis in the Western Conference playoff picture.

Sure, Z-Bo isn’t doing anything he hasn’t already done for ages, but the fact that he’s now doing it off the pine makes him the scariest bench player in the game. His stats are comparable with any other elite reserve, his team is a winner, and he’s the only backup that’s obviously more intimidating to check than the guy who starts ahead of him.

Who is your pick for Sixth Man of the Year? Share your choices and your thoughts in the comments section below!