JULY 14: Ten days after Hayward made his decision, he has formally signed his new maximum salary contract with the Celtics, the team confirmed today in a press release. Boston cleared the necessary cap room earlier today by waiving Jordan Mickey. 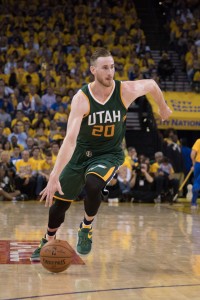 JULY 4: Gordon Hayward has made it official. In a piece for The Players’ Tribune, Hayward has announced that he has decided to join the Celtics as a free agent. Hayward will receive a four-year maximum salary contract from Boston with a player option on the final year, reports Shams Charania of The Vertical (Twitter links).

“After seven years in Utah, I have decided to join the Boston Celtics,” Hayward writes. “I know that will be tough to hear for Jazz fans — and I really want you all to know that you mean the world to me and my family. Over the past few days, I’ve been genuinely torn. And I know that this process isn’t easy on the fans, either. So I just want to be as straight-up as possible about why I’m coming to Boston.

“There were so many great things pulling me in that direction,” Hayward continued. “There was the winning culture of Boston, as a city — from the Sox, to the Pats, to the Bruins. There was the special history of the Celtics, as a franchise — from Russell, to Bird, to Pierce, and it goes on. There was the amazing potential of this current Celtics roster, as a team — from ownership, to the front office, to a talented roster with Isaiah, and Al, and everyone else. And of course, there was Coach [Brad] Stevens: Not just for the relationship that we’ve built off the court — but also for the one that we started building on the court, all of those years ago, in Indiana.”

It has been an eventful day for Hayward, as a report from Chris Haynes of ESPN indicating that Hayward planned to sign with the Celtics was shot down by other outlets, with Hayward’s agent Mark Bartelstein issuing a statement confirming that his client hadn’t finalized his decision. However, Haynes’ scoop proved accurate, with Hayward formally announcing his new team a few hours later.

By joining the Celtics, Hayward will be in line for a four-year contract worth $127,829,970, though he may end up not opting into that fourth year. By that point, he’ll have 10 years of NBA experience, which would put him in line for a new max deal worth 35% of the cap instead of his current 30%. That potential desire to opt out after year three reduced the importance of Utah’s ability to offer a fifth year.

Before they finalize the signing of Hayward, the Celtics will have to make a series of salary cap moves to create the necessary cap room for his lucrative new deal. In addition to renouncing their free agents, the C’s figure to pull Kelly Olynyk‘s qualifying offer, making him an unrestricted free agent. Jordan Mickey and Demetrius Jackson are candidates to be waived, and Boston will likely have to make at least one trade — Marcus Smart, Avery Bradley, Terry Rozier, and Jae Crowder are among the candidates to be moved. Teams are already engaging the Celtics on possible deals, tweets Chris Mannix of The Vertical.

By adding Hayward, the Celtics made a big free agent splash for the second straight summer, having signed Al Horford a year ago. The team wasn’t able to land a second star like Jimmy Butler or Paul George via trade, but the reigning No. 1 seed in the Eastern Conference has added an All-Star forward in Hayward and the No. 3 overall pick in Jayson Tatum, and still has a collection of future draft picks at its disposal, setting the franchise up very well for the future.

Hayward’s move to the Eastern Conference also comes at a time when most of the league’s stars who are changing teams are heading west. Butler is now in Minnesota, George is headed to Oklahoma City, and Paul Millsap will land in Denver. The talent drain in the East should give Hayward a clearer path to a spot in the NBA Finals, though Boston will still have to overcome LeBron James and the Cavaliers.

As for the other two teams involved in the Hayward sweepstakes, the Jazz are hit the hardest, having lost both Hayward and George Hill today. The team was able to add a replacement for Hill by acquiring Ricky Rubio last week, but replacing Hayward’s production will be much more difficult.

Still, now that they no longer need to accommodate a max deal for Hayward, the Jazz have some options. According to Michael Scotto of Basketball Insiders (Twitter link), Utah has scheduled a meeting with Wizards RFA Otto Porter. However, Utah currently doesn’t have the cap space for a max offer for Porter, and moving contracts to open up that room would be risky, since the Wizards could match any offer.

Meanwhile, the Heat have a chunk of available cap room that they can now use on other players as well. Barry Jackson of The Miami Herald reports (via Twitter) that Bartelstein, who also reps Miami free agent forward James Johnson, is “working on something” for Johnson and will talk with Pat Riley tonight.