Hoops Rumors is breaking down the 2017 offseason for all 30 NBA teams, revisiting the summer’s free agent signings, trades, draft picks, departures, and more. We’ll evaluate each team’s moves from the last several months and look ahead to what the 2017/18 season holds for all 30 franchises. Today, we’re focusing on the Phoenix Suns. 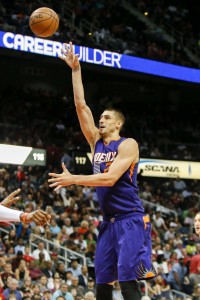 Check out the Phoenix Suns’ full roster and depth chart at RosterResource.com.

The Suns entered the 2017 offseason armed with cap room and ready to make a major splash in free agency or on the trade market. After having been linked to Kevin Love in several trade rumors, Phoenix lined up meetings with the top two free agent big men on the market, Blake Griffin and Paul Millsap.

Ultimately, Love remained in Cleveland, Griffin cancelled his meeting with the Suns after quickly coming to the terms with the Clippers, and the Suns reconsidered their direction. Less than 24 hours after the free agent period began, the Suns backed off their pursuit of Millsap, opting instead to continue taking a patient approach to the rebuilding process and to potentially use their cap space to accommodate salary dumps rather than to sign an impact free agent.

The Suns may have been tempted to deviate from that approach later in the summer when Kyrie Irving made his trade request — Irving is younger than Love, Griffin, or Millsap, and would’ve been a better fit for the Suns’ timeline. However, acquiring Cleveland’s star point guard likely would have cost the Suns Josh Jackson and a future first-round pick, and despite being the club most frequently linked to Irving, Phoenix wasn’t willing to pay that price and compromise its rebuild.

That looks to me like the right call. Clawing their way back to the upper ranks of the Western Conference will be a long, challenging road for the Suns, but going out and compromising their future cap flexibility to land an impact player would have represented an ill-advised short cut. This roster has a long way to go before it’s ready to contend, and adding a single star wouldn’t have changed that.

Veteran guards Eric Bledsoe and Brandon Knight continued to be the subjects of trade rumors throughout the offseason, and young bigs Alan Williams and Alex Len reached free agency. All four of those players are still Suns though, as the roster remained surprisingly stable over the summer.

Thirteen of the 15 players who finished the 2016/17 season as Suns are still on the roster, with Leandro Barbosa and Ronnie Price representing the only departing vets. While their career résumés are impressive (they’ve appeared in nearly 1,400 combined regular season games), Barbosa and Price didn’t have a major impact on last season’s club. Barbosa at least had a rotation role, averaging 6.3 PPG in 67 games, but Price only appeared in 14 total contests. 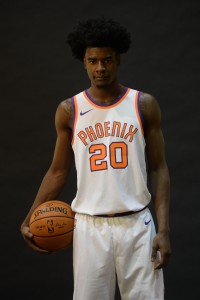 The Suns’ only major moves in free agency involved re-signing their own players, with Williams and Len getting new deals from the team. That meant that Phoenix’s most notable additions came in the draft, and fourth overall pick Jackson topped the list of the Suns’ draftees.

The Suns headed into the draft lottery as the second-highest seed and slipped two spots to No. 4, so it will be interesting to see if that outcome ends up coming back to haunt the team in the years to come. Having a shot to draft Markelle Fultz or Lonzo Ball likely would’ve resulted in a very different offseason for the Suns, who could have shopped Bledsoe more aggressively in that scenario.

Instead, the Suns came out of one of the best point guard drafts in recent memory with a versatile, two-way forward who – even at age 20 – should be able to contribute immediately, particularly on the defensive end. Jackson’s jump shot will have to improve significantly if he’s going to fully live up to his potential and become an All-Star caliber player, but even if that shot takes some time to come around, his athleticism and his ability to guard multiple positions make him a valuable piece for the Suns’ core. And the team clearly recognizes that value, having resisted including Jackson in an offer for Irving.

The Suns also looked to make up for the loss of Barbosa and Price by adding Davon Reed with the 32nd overall pick in the draft. A 39.5% three-point shooter over the course of his college career, the rookie guard could have teamed with Bledsoe, Knight, Devin Booker, and Tyler Ulis to form a young, promising backcourt.

Instead, after suffering a meniscus tear, Reed looks likely to miss most of the first half of the season, while an ACL tear for Knight is expected to sideline him for the entire 2017/18 campaign. Newly acquired shooting guard Troy Daniels figures to help fill out the backcourt rotation in their absence.

On paper, the Suns look pretty similar to the team that finished 24-58 and finished dead last in the Western Conference in 2016/17. Of course, Phoenix wasn’t trying too hard to win games down the stretch, and another year of development for the club’s young players should result in an improvement on the court.

Still, it’s hard to imagine a scenario in which the Suns aren’t once again occupying one of the spots at the bottom of the conference. Fellow lottery teams like the Nuggets, Pelicans, Timberwolves, and Lakers made more tangible improvements this offseason, and key Suns frontcourt players like Jackson, Marquese Chriss, and Dragan Bender will still be finding their footing in the NBA this season. Plus, the Suns have been hit hard by the injury bug this offseason, with Knight, Reed, and Williams all poised to miss extended time.

Another finish in the bottom five of the NBA standings may not thrill fans, but it’s probably good for the Suns’ long-term outlook. When Phoenix made the decision this summer to be patient with the rebuild rather than looking for a short-term fix, the club committed to at least another year or two in the lottery. That should help give the Suns’ young nucleus some time to grow, while giving the franchise the opportunity to add a couple more core pieces in the coming drafts.

One thought on “2017 Offseason In Review: Phoenix Suns”