Hoops Rumors is breaking down the 2017 offseason for all 30 NBA teams, revisiting the summer’s free agent signings, trades, draft picks, departures, and more. We’ll evaluate each team’s moves from the last several months and look ahead to what the 2017/18 season holds for all 30 franchises. Today, we’re focusing on the Houston Rockets. 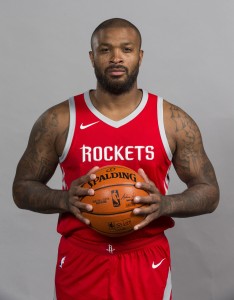 Check out the Houston Rockets’ full roster and depth chart at RosterResource.com.

Daryl Morey‘s quest for superstars led him this summer to Chris Paul, who at first glance seems to be an odd match for the Rockets and their up-tempo offense. During his years running the show for the Clippers, Paul preferred to slow things down, excelling in half-court sets. With James Harden emerging as a bona fide star point guard last season for the run-and-gun Rockets, Houston wasn’t really in the discussion throughout the year as a probable landing spot for CP3.

Nevertheless, Morey and the Rockets’ front office had a vision for how the two star point guards could coexist alongside one another, and both players bought into that vision. Heavily recruited by Harden, Paul told the Clippers several days before free agency that he intended to head to Houston.

The only problem? The Rockets didn’t have the cap space necessary to sign Paul if he were to opt out of his contract and become a free agent. Rather than trying to trade Ryan Anderson and his $19.5MM+ cap hit to clear that space – a difficult task, as the team discovered later in the summer – the Rockets made a trade with the Clippers in advance of free agency, with Paul opting into the final year of his deal to make it work.

The Paul blockbuster with the Clippers cost the Rockets a significant amount of depth, with salary-matching rules necessitating the inclusion of several rotation players from last season. Chief among the players heading to Los Angeles in the trade were Patrick Beverley and Lou Williams.

Beverley, a member of the All-NBA Defensive First Team for 2016/17, was an excellent fit alongside Harden. The MVP runner-up acted as the point guard on offense, with Beverley not needing to handle the ball as frequently as a traditional point guard. On defense though, Beverley was tasked with guarding the Stephen Currys and Russell Westbrooks of the world, lightening Harden’s load.

Although it worked well for the Rockets, Beverley didn’t love that arrangement, confirming after being dealt to the Clippers that he had asked Houston to trade him. The Rockets are hoping that Paul, who won’t be asked to carry as much of the offensive load as he was in L.A., can replace Beverley as the backcourt stopper, but at age 32, CP3 may not be quite the same tenacious defender he was a few years ago. Beverley’s D will be missed.

Williams, meanwhile, placed third in Sixth Man of the Year voting last season, creating instant offense off the bench for the Lakers and – after a deadline deal – the Rockets. He’ll be missed too, but it’s not as if Houston will be lacking for scoring off the bench — the team still has Eric Gordon, the player who beat out Williams for the Sixth Man award.

A pair of 23-year-olds, Sam Dekker and Montrezl Harrell, were the other key players included in the Paul deal. Dekker and Harrell – born 100 days apart and drafted 14 spots apart in 2015 – were both solid contributors in Houston last season, averaging about 18 minutes per game apiece. If the Rockets weren’t on the verge of title contention, they likely would have been happy to hang onto Dekker and Harrell to see if they could develop into more reliable core pieces. A focus on immediate on-court results made the duo expendable, however. 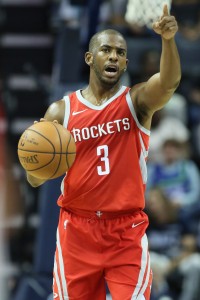 I made note of a few of the potential concerns about the acquisition of Paul in the sections above, and as long as he remains sidelined due to his knee issue, those concerns figure to linger. But it’s also worth mentioning how dangerous (and fun) the Harden/Paul duo can be if it gets going — and if CP3 fully adjusts to Houston’s style of play. Harden and Steve Nash have put up some of the best point guard numbers of all-time in Mike D’Antoni‘s system. The idea of having either Harden or Paul playing that role for a full 48 minutes per game is tantalizing.

Paul wasn’t the only notable addition of the offseason for the Rockets, however. After sacrificing much of their depth in the deal with the Clippers, the Rockets built their rotation back up through free agency.

Although their signings flew somewhat under the radar compared to other summer splashes, P.J. Tucker and Luc Mbah a Moute are very intriguing pieces for the Rockets, who will need big, defensive-minded wings to slow down players like Kevin Durant, Klay Thompson, and Kawhi Leonard in the postseason. Tucker and Mbah a Moute fit that bill.

In addition to playing solid defense on the wing, Tucker and Mbah a Moute each should be capable of hitting open three-pointers. Tucker made 35.7% of his outside shots last season, while Mbah a Moute converted 39.1%. They’ll both be asked to attempt those shots more frequently in Houston, with Harden and Paul getting them plenty of open looks in the corner. If they can maintain or improve upon last year’s percentages, they could be underrated difference-makers for the Rockets.

Tarik Black is the Rockets’ other free agent addition worth noting, though it remains to be seen how much playing time he’ll get as long as Clint Capela and newly re-signed center Nene are healthy.

After the Rockets acquired Paul in June, a report surfaced suggesting that the team was confident it could cap off its offseason by adding either Paul George or Carmelo Anthony, creating a new Big Three alongside Harden and CP3. Instead, Houston’s efforts to add a high-scoring forward fell short, and the club watched as the conference-rival Thunder landed both players.

As the Thunder have discovered early in the season, the process of incorporating two new All-Stars can be bumpy, and the Rockets will already have their hands full making sure Paul is comfortable in his new home. Still, in the long run, Houston likely would’ve had a better chance to knock off the Warriors in the spring with one more impact addition. As solid as guys like Tucker and Mbah a Moute are on the defensive end, a two-way forward like George would have been a godsend in a seven-game series against Golden State.

Without that final piece to the puzzle, I’m skeptical that the Rockets will be capable of a major postseason upset, but the addition of Paul is intriguing. A player of his caliber certainly raises Houston’s ceiling, but given the lingering uncertainty about his fit, there’s potential downside too. I’m eager for him to get healthy and return to the court, since the more we see of the Rockets’ backcourt in action, the better sense we’ll have of just how dangerous this team is.