The Suns have fired head coach Earl Watson, reports ESPN’s Adrian Wojnarowski (via Twitter). After a 2016/17 season in which no head coaches were fired, Watson’s dismissal comes just three games into the 2017/18 regular season. 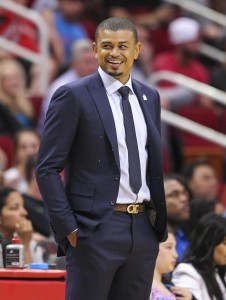 According to Wojnarowski (via Twitter), Suns owner Robert Sarver and general manager Ryan McDonough are meeting with the club’s assistant coaches. Associate head coach Jay Triano is expected to take over the head coaching duties on an interim basis, says Woj.

While Watson didn’t get much of a leash to start the year, it’s hard to think of many teams that have come out as flat as the Suns to open a season. The team has already lost to the Trail Blazers by 48 points and to the Clippers by 42. Those blowout losses sandwiched a narrow defeat to the Lakers, who beat the Suns in Phoenix.

The Suns’ slow start has also led to one of the team’s veteran players apparently expressing his displeasure publicly, with Eric Bledsoe tweeting earlier today, “I don’t wanna be here.” Although Bledsoe’s tweet lacked context, a report out of Phoenix from local radio host John Gambadoro suggests it’s just what it sounds like — the point guard is unhappy with the Suns and would like to be traded.

Watson initially joined the Suns’ coaching staff as an assistant in 2015/16 before the mid-season firing of Jeff Hornacek prompted his promotion to the helm. In 33 games that year and then the entire 2016/17 season, the 38-year-old coach posted a .287 win percentage, having dropped 82 games along the way.