The Mavericks are in a curious position as an NBA franchise, suspended in a unique limbo between rebuilding and (sorta) contending. Thank Dirk Nowitzki for most of it, as team owner Mark Cuban seems to have insisted that the Mavs field a semi-competent roster in the future Hall of Famer’s final years.

While the club has seemingly acknowledged the writing on the wall and started to amass long-term building blocks – most recently, ninth overall pick Dennis Smith Jr. – it’s unlikely that the Mavs will fully give into an outright rebuild so long as Nowitzki is on board for 2018/19 (which, for reasons discussed below, we’re going to assume to be the case). 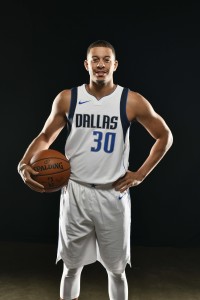 Seth Curry, PG, 27 (Down) – Signed to a two-year, $6MM deal in 2016
Curry has yet to see the court this season on account of a leg injury that may now require surgery. Even at full health, however, it’s not likely that Curry would have siphoned minutes away from either lottery pick Dennis Smith Jr. or several other niche players in Dallas’ backcourt rotation, a reality that casts doubt on his future with the franchise.

Devin Harris, SG, 35 (Down) – Signed to a four-year, $17MM deal in 2014
While Harris has produced admirably off the bench for the Mavs, it doesn’t make sense for a team attempting to usher in a new era to retain a 35-year-old reserve in an already crowded backcourt. Harris could be a sneaky value add for a contender late in the free agency process next summer.

Yogi Ferrell, PG, 25 (Up) – Signed to a two-year, $2MM deal in 2017
Ferrell carved out a role for himself as a rotation piece on the Mavs last season but he probably won’t garner much interest as a restricted free agent next summer given that his ceiling seems somewhat capped. Still, he could provide solid long-term value in Dallas if the team does decide to part ways with Curry and/or Harris.

Wesley Matthews, SF, 31 (Down) – Signed to a four-year, $70MM deal in 2015
The Mavs poached Matthews from an elite Trail Blazers squad hopeful that the swingman’s two-way game would help keep their aging core relevant in the West. Through three seasons, Matthews has posted a relatively uninspiring 12.9 points per game but will almost certainly return to Dallas considering how unlikely it would be for him to exceed his $19MM 2018/19 player option on the open market.

Josh McRoberts, PF, 31 (Down) – Signed to a four-year, $23MM deal in 2014
The Mavs absorbed the final year of McRoberts’ contract over the summer, yielding a future second-round pick from the Heat in the process. Considering that the 30-year-old has been sidelined with a knee injury since joining the organization, he’ll be hard-pressed to earn a significant contract after this season. McRoberts may be able to fill a rotation spot somewhere – maybe even in Dallas – but he’ll presumably have to do so on a minimum salary.

Salah Mejri, C, 32 (Down) – Signed to a three-year, $3MM deal in 2015
While Mejri has played a modest role for the Mavs in each of the past three seasons, he won’t command much on the open market as a 32-year-old free agent with career averages south of five points per game.

Nerlens Noel, C, 24 (Up) – Signed to a one-year, $4MM deal in 2017
It’s been less than a year since the Mavs plucked a disgruntled Noel away from the Sixers, but any notion that the team was eager to include the 23-year-old in their long-term plans has quickly faded. It’s hard to picture Noel commanding the big money he supposedly aspired to land last summer but even harder to picture him back in Dallas next season after how head coach Rick Carlisle has handled his minutes so far this season. Realistically the 2016 lottery pick’s value falls much higher than his $4MM qualifying offer and, once the free agency dominoes start falling next summer, he should find a team happy to throw him a more significant long-term offer.

Dirk Nowitzki, PF, 40 (Down) – Signed to a two-year, $10MM deal in 2017.
Nowitzki has said that his decision (yes, his decision, even though it’s formally and contractually the team’s) will be based on how he feels over the course of this season. For what it’s worth, Cuban hopes to see him return and thinks there’s good chance that he does so in order to break the record for most seasons with one franchise.