5:10pm: The Hornets made the signing official with a press release.

4:41pm: Borrego’s deal with the Hornets will be for four years, ESPN’s Adrian Wojnarowski reports.

3:27pm: The Hornets have officially finalized contract terms with James Borrego and hired him as their new head coach, reports Rick Bonnell of The Charlotte Observer. While the team has yet to issue an announcement of its own, that should happen soon. 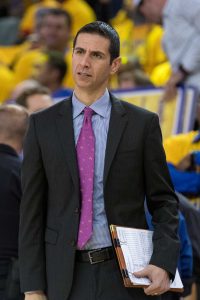 Borrego began his NBA coaching career with the Spurs, spending seven seasons with the team from 2003 to 2010 before joining the Pelicans (then-Hornets) for two years and the Magic for three. He returned to San Antonio in 2015. Primarily an assistant over the course of his career, Borrego earned his lone head coaching experience in 2015 in Orlando, leading the Magic to a 10-20 record as Jacque Vaughn‘s interim replacement.

Despite his limited experience leading a team, Borrego’s years working under Gregg Popovich made him a popular coaching candidate this offseason. Borrego interviewed with the Knicks and Suns before they decided to hire David Fizdale and Igor Kokoskov, respectively. He also received reported interest from the Hawks, and had been scheduled to interview with the Bucks up until he reached a deal with Hornets.

Borrego will take over for Steve Clifford in Charlotte. Clifford, who was fired shortly after the 2017/18 regular season ended, had been the NBA’s seventh-longest-tenured head coach. He led the Hornets to a 196-214 record (.478) and a pair of playoff berths during his five years on the sidelines.

With a new head coach in place in Charlotte, there are now four teams conducting active coaching searches: the Hawks, Pistons, Bucks, and Magic.