JULY 23: The Hornets’ deal with Parker is now official, the team confirmed today in a press release. 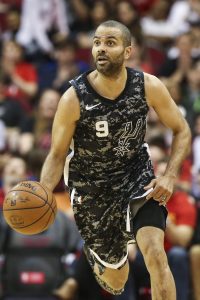 “We are thrilled to add a player of Tony’s caliber and experience to our roster,” GM Mitch Kupchak said in a statement. “We believe his track record of success and playoff resume will add backcourt depth to our roster and veteran leadership to our group. Parker’s experience with Head Coach James Borrego will be an invaluable asset to us moving forward as well. We are excited to welcome Tony to Charlotte and for him to continue his Hall-of-Fame career with the Hornets.”

JULY 6: After spending 17 seasons in San Antonio, Tony Parker will head to Charlotte for the 2018/19 season. The veteran point guard has reached an agreement to sign with the Hornets, reports Shams Charania of Yahoo Sports (via Twitter).

Parker will sign a two-year, $10MM contract with the Hornets, according to ESPN’s Adrian Wojnarowski (via Twitter). A tweet from Charlotte forward Nicolas Batum first hinted that Parker – Batum’s teammate on the French national team – would join the franchise.

The Hornets had been on the lookout for a backup point guard after struggling to find consistent production behind Kemba Walker in recent years. Parker, 36, will provide a steady presence at that spot, though he’s no longer the impact player he once was. In 2017/18, the longtime Spur lost his starting job to Dejounte Murray and averaged a career-low 7.7 PPG and 3.5 APG in 55 games (21 starts).

As Jabari Young of The San Antonio Express-News tweets, there were about five or six teams interested in Parker, but he chose the Hornets because the team sold him on more playing time and a significant role.

Parker’s departure is the latest development in what has been an unusually dramatic year in San Antonio. The Spurs will now be without a point guard who first joined the franchise back in 2001 and has appeared in more than 1,400 total regular season and postseason games with the team.

According to Wojnarowski (via Twitter), Parker called Spurs head coach Gregg Popovich within the last hour to inform him of his plan to head to Charlotte. Although the Spurs wanted Parker back, the veteran will reunite with former San Antonio assistant James Borrego, who was hired as the Hornets’ head coach this spring.

This is the second time in recent years that a club headed by a former Spurs assistant has made a play for a longtime Spur. The Sixers and Brett Brown were unable to lure Manu Ginobili to Philadelphia in 2016, but Borrego and the Hornets were able to secure Parker’s services this time around.

Parker’s deal figures to be completed using a portion of the Hornets’ mid-level exception, since the team is over the cap. The trade that sent Dwight Howard to Brooklyn helped Charlotte create the flexibility to complete a signing like this one without going into tax territory.