JULY 20: The Spurs have officially signed Belinelli, the team announced today in a press release. 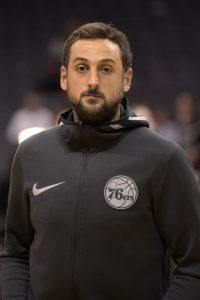 JULY 1: Former Spur Marco Belinelli will return to San Antonio on a two-year, $12MM contract, tweets ESPN’s Adrian Wojnarowski. The Spurs still have their mid-level exception available and may use that to ink Belinelli.

The 32-year old sharpshooter spent two seasons with the Spurs from 2013 to 2015. He started last season with the Hawks, then joined the Sixers after agreeing to a buyout in February. He averaged 12.9 points in 10 playoffs games with Philadelphia.

While Belinelli isn’t the sort of dynamic player who can impact games in a variety of different ways, his outside shooting makes him a valuable rotation piece. He attempted a career-high 5.3 threes per game in 28 regular season contests with Philadelphia last season, converting them at a 38.5% rate.

We ranked Belinelli as the 30th-best player available this offseason in our list of 2018’s top 50 free agents.

Belinelli is the second agreement of the night for San Antonio, which also reached a deal to re-sign veteran forward Rudy Gay.