JULY 6: Evans’ deal with the Pacers is now official, the team announced in a press release. “With Tyreke, we thought we needed a secondary ball-handler to not only compliment Victor [Oladipo], but he can turn it downhill and make plays for others,” said president of basketball operations Kevin Pritchard. 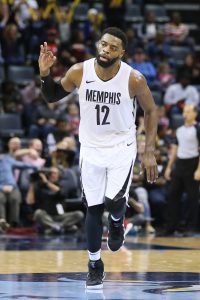 Indiana also made its deal with McDermott official today.

JULY 3: The Pacers are in agreement on a one-year, $12MM deal with Tyreke Evans, according to Shams Charania of Yahoo Sports (via Twitter). ESPN’s Adrian Wojnarowski had reported (via Twitter) that Evans and the Pacers were closing in on a one-year deal.

Twitter user @SneakerReporter first broke word of a potential $12MM deal between the Pacers and Evans nearly 24 hours ago, though it’s not clear if an agreement was formally in place that early or if the two sides finalized it today. Evans traveled to meet with the Pacers today after having already met with the Thunder, Lakers, Warriors, and Hornets earlier in free agency, and Wojnarowski indicated this morning that Evans and the Pacers were still working toward a deal.

A former fourth overall pick and Rookie of the Year, Evans appeared in 52 games during an injury-shortened season for the Grizzlies. When healthy, he looked as good as he has at any time in his nine-year NBA career, averaging 19.4 PPG, 5.2 APG, and 5.1 RPG with a .452/.399/.785 shooting line.

The lottery-bound Grizzlies held onto Evans at the trade deadline rather than getting what they could for him, and at the time reports suggested that Memphis intended to push hard to re-sign the 28-year-old as a free agent, using their mid-level exception. However, there has been no indication that the Grizzlies made a strong effort to bring back Evans.

While other teams showed interest in Evans, none of them had the ability to make the sort of $12MM offer the Pacers did. Even after committing to Doug McDermott earlier in free agency, Indiana still had about $12-15MM in cap room to work with, and will devote most or all of that room to Evans. He’ll provide another play-maker in the backcourt for the Pacers, who lost Lance Stephenson to the Lakers.

According to Anthony Slater of The Athletic (Twitter link), Evans was the Warriors‘ initial target using their taxpayer’s mid-level exception ($5.337MM), but they were turned down by the guard, who was seeking more money and a larger role. He should get both in Indiana, though Golden State is probably happy with its fallback plan for that MLE.