JULY 10: The signing is now official, the club confirmed today in a press release. 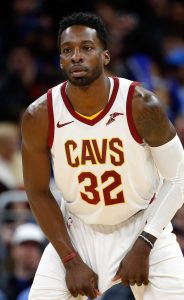 The Cavs reportedly had interest in retaining Green, but he’ll head to D.C., where the Wizards figure to slot him into a similar role to the one Mike Scott had last year off the bench. Scott agreed to a free agent deal with the Clippers on Monday.

Because he has at least 10 years of NBA experience, Green will qualify for the highest possible minimum salary, at $2,393,887. However, the former fifth overall pick will only against Washington’s cap for $1,512,601.

Even after agreeing to sign Green and claiming Thomas Bryant off waivers, the Wizards likely aren’t done addressing their frontcourt. Having sent Marcin Gortat to the Clippers last week, Washington only has Ian Mahinmi, Jason Smith, and Bryant at center.

The Wizards likely won’t have their full mid-level exception available, since they project to be over the tax line, but the team still has the taxpayer’s MLE ($5.337MM) if needed.