Hoops Rumors is breaking down the 2018 offseason for all 30 NBA teams, revisiting the summer’s free agent signings, trades, draft picks, departures, and more. We’ll evaluate each team’s moves from the last several months and look ahead to what the 2018/19 season holds for all 30 franchises. Today, we’re focusing on the New York Knicks.

Check out the New York Knicks’ full roster and depth chart at RosterResource.com. 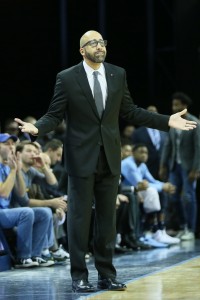 Head coaching changes are nothing new in New York, where David Fizdale is the 12th man to hold the position in the past 18 years, but there’s a sense of optimism that the Knicks may have finally found the right man. Fizdale had been among the hottest names on the coaching market since being fired by the Grizzlies last year and had interviewed with the Magic, Hawks, Suns and Hornets before accepting the job with the Knicks.

Fizdale was a highly regarded assistant with a reputation for relating to players before getting the opportunity in Memphis. He guided the Grizzlies to the playoffs in 2016/17 before getting fired early last season after an injury to Mike Conley caused the team to stumble to a 7-12 start. Fizdale also clashed with Marc Gasol, which he used as a learning experience in dealing with Kristaps Porzingis. Shortly after the Knicks hired him, Fizdale traveled to Latvia to meet with Porzingis and discuss his role with the organization.

Fizdale has moved quickly to put his stamp on a franchise that has endured five straight losing seasons and endless turmoil in its front office and coaching staff. He declared an open competition for all five starting spots and said even established players such as Enes Kanter and Tim Hardaway Jr. will have to earn their playing time during the preseason.

Despite the optimism that Fizdale brings to the franchise, he still faces an uphill battle in his first season on the Knicks’ bench. Porzingis’ status remains uncertain as he recovers from a torn ACL, and there have been suggestions that he may not play at all this season. Fizdale’s primary job will be to set a foundation for next year, when the Knicks hope to have Porzingis healthy and add a maximum-salaried free agent.

Kyle O’Quinn has been a valuable backup center for the Knicks for the past three seasons, but he opted to sign with the Pacers for their $4.449MM room exception. That means the logjam that New York had in the middle last season is almost fully cleared out, with Willy Hernangomez traded to the Hornets and Joakim Noah negotiating a buyout.

The Knicks also lost a pair of veteran free agents in Michael Beasley and Jarrett Jack. Beasley signed with the Lakers after turning in his best NBA season in several years, averaging 13.2 points and 5.6 rebounds in 74 games. Jack opted to return to the Pelicans after posting a 7.15/3.1/5.6 line in 62 games and serving as the Knicks’ starting point guard for most of the season.

First-round pick Kevin Knox has Knicks fans excited about his potential for the future and may be an impact player right away. The ninth player selected in this year’s draft, Knox was impressive in the Las Vegas Summer League and could develop into a strong candidate for Rookie of the Year if he gets consistent playing time.

The Knicks also have high hopes for second-rounder Mitchell Robinson, a highly regarded center prospect who opted not to play college basketball last season. If Robinson can shake off the rust and adapt to the NBA game, there should be playing time available as Kanter’s backup.

New York was relatively quiet during free agency because of limited resources, but the team did sign Mario Hezonja, who never established himself with the Magic after being the fifth pick in the 2015 draft. Hezonja is still only 23 and is coming off his best season, averaging 9.6 points in 22.1 minutes per game. The Knicks also gave a non-guaranteed deal to power forward Noah Vonleh, who split last season between the Trail Blazers and Bulls.

Fizdale has said he and the front office are opposed to tanking, but with the Knicks’ talent level, it may not matter. New York will have a tough time reaching last year’s win total of 29 considering Porzingis’ uncertain status. Team president Steve Mills recently said no timetable has been set for Porzingis to return, and if the Knicks fall out of the playoff race early, as expected, there will be little incentive to bring him back at all this season.

Knicks fans can at least hope this will be the last year of misery for a while. A buyout with Noah should clear enough cap space to allow New York to offer a maximum deal in free agency, and a talented class is looming, led by Kevin Durant. Whether Porzingis plays this season or not, he should be fully healthy a year from now. Add in a high lottery pick and the Knicks could have a nice foundation in place for the start of the next decade.

Most importantly, the front office circus and the revolving door of coaches seem to be part of the past. The Knicks have a solid management team in place with Mills and GM Scott Perry, and their reluctance to abandon their plan for gradual growth by making a huge offer for Jimmy Butler should be a sign that a brighter future lies ahead.

One thought on “2018 Offseason In Review: New York Knicks”