Hoops Rumors is breaking down the 2018 offseason for all 30 NBA teams, revisiting the summer’s free agent signings, trades, draft picks, departures, and more. We’ll evaluate each team’s moves from the last several months and look ahead to what the 2018/19 season holds for all 30 franchises. Today, we’re focusing on the Utah Jazz.

Check out the Utah Jazz’s full roster and depth chart at RosterResource.com.

In a league where change is common, the Jazz were remarkably quiet during the offseason. First-round pick Grayson Allen is the only significant addition to the roster, while veteran forward Jonas Jerebko, who was waived in July and later signed with the Warriors, was the only significant loss.

That means last season’s surprise contender in the Western Conference will be back with virtually the same cast of characters that won 48 games and ousted the Thunder in the first round of the playoffs. The emergence of Donovan Mitchell, who finished second in the Rookie of the Year voting, helped to speed up the rebuilding process in Utah after Gordon Hayward left to sign with the Celtics.

The Jazz kept their rotation together by re-signing power forward Derrick Favors and reserve guard Dante Exum over the summer.  Coach Quin Snyder should benefit from the continuity among a solid group that appears headed for a long string of postseason trips.

Jerebko spent just one season in Utah and only played 15.3 minutes per night, but he was a valuable shooter who helped to stretch opposing defenses on the second unit. Jerebko sank a career-high 65 3-pointers last season and shot .414 from long distance.

The Jazz elected to waive Jerebko in July rather than guarantee his $4.2MM contract for the upcoming season. Golden State expressed interest in him right away and signed him as soon as he cleared waivers. 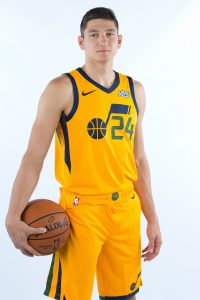 Utah will be counting on Allen to replace some of that 3-point firepower off the bench. He was a sharpshooter from beyond the arc during his four years at Duke, hitting .370 as a senior and .380 for his college career. The early returns have been positive as Allen averaged 12.6 points per game during the preseason and ranked in the top 10 among rookie scorers. He shot 51% overall and 52% from 3-point range in five games.

Once the college season ended, Allen made a steady rise up the draft board, taken with the 21st pick after originally being projected as a second-rounder, recounts Andy Larsen of The Salt Lake Tribune. Allen had a standout performance in a Salt Lake City workout that featured prospects Aaron Holiday, Jalen Brunson and Khyri Thomas. He dominated that session, then had a repeat performance at the CAA Pro Day with scouts from all 30 teams watching.

Utah aced the draft last year by picking up Mitchell, and the front office is confident that Allen will also outplay his draft position.

The Jazz were an afterthought for the playoffs heading into last season, but Mitchell’s rise turned them into one of the best teams in the Western Conference. Rudy Gobert returned from a pair of injuries to provide an anchor in the middle and was rewarded with Defensive Player of the Year honors. Ricky Rubio is a dynamic leader of the offense whose presence was missed after an injury sidelined him in the second-round playoff series against Houston. Favors and Joe Ingles developed into an effective forward combination in their first year of starting together.

Utah opted to play it safe during the offseason, focusing its efforts on re-signing Favors and Exum, along with Raul Neto and Georges Niang, rather than trying to recruit free agents. With Rubio in a contract year, the Jazz will likely follow the same approach next summer. It seems to be working as the organization shrugged off the loss of Hayward and faces the future with a talented core in place and no bad long-term contracts.