The Suns have reached an agreement on a one-year deal with free agent guard Jamal Crawford, according to Shams Charania of The Athletic (Twitter links). A report over the weekend indicated that Phoenix had offered Crawford a minimum salary contract after meeting with him on Friday. 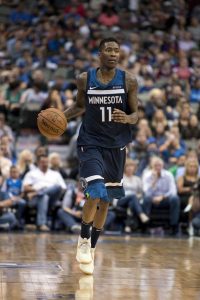 Crawford, a three-time Sixth Man of the Year winner, spent last season with the Timberwolves, averaging 10.3 PPG on .415/.331/.903 shooting. Although he could have exercised a $4.5MM player option to stay in Minnesota, Crawford didn’t love the role he played with the Wolves and sought a better fit, turning down that option and hitting the open market.

Although several teams – including the Warriors, Celtics, Sixers, and Lakers – reportedly showed interest in Crawford over the course of the offseason, he had trouble finding a new NBA home. His new agreement with Phoenix comes a day before the regular season gets underway and will represent a pay cut — the minimum salary for a player with Crawford’s years of experience is just shy of $2.4MM.

It’s an interesting move for the Suns, who had already been facing a roster crunch, with 17 players for 15 spots. Signing Crawford means that the club will now have to trade or release three players instead of two by today’s deadline. Richaun Holmes, Isaiah Canaan, and Shaquille Harrison are on non-guaranteed contracts, while Darrell Arthur is the most likely release candidate among the players with guaranteed salaries.

A combo guard, Crawford figures to get an opportunity to play a ball-handling role for a Suns team short on experience at the one. Besides Canaan and Harrison, the other two point guards on the roster are a pair of second-round rookies, Elie Okobo and De’Anthony Melton.

The 38-year-old Crawford figures to serve as a mentor for those players and as a veteran leader for a team that has aspirations of competing for a playoff spot after signing Trevor Ariza and drafting Deandre Ayton over the summer.