While the three-team trade finalized by the Cavaliers, Bucks, and Wizards on Friday won’t have the same on-court impact as the blockbuster the Raptors and Spurs completed in the offseason, or the Sixers’ acquisition of Jimmy Butler last month, it’s a complicated transaction with many moving parts. So, as we did with those previous deals, we want to take a deep dive into all the financial and cap considerations going on for the three clubs involved in the swap.

How salary-matching works in the trade: 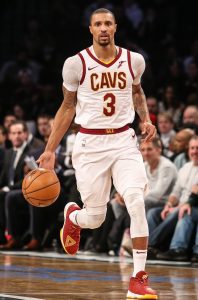 Finally, the Wizards can use the $3,454,500 traded player exception they created in October’s Jodie Meeks trade on Dekker, whose $2,760,095 salary fits nicely and leaves just $694,405 on that TPE. As a result, Washington essentially trades Smith’s $5,450,000 salary for “nothing,” creating a new trade exception worth that amount.

Teams have one year to use their traded player exceptions, but the Cavs and Wizards will actually get a couple extra days to use theirs. Trade exceptions can’t expire on a weekend, so the expiry date for the new TPEs created by Cleveland and Washington will be December 9, 2019, since December 7 falls on a Saturday next year.

How the Ted Stepien rule affects this trade:

The Ted Stepien rule, which we explain in more detail in a glossary entry, prohibits teams from completing trades that would leave them without a first-round pick for two consecutive future seasons.

That’s an issue for the Bucks — they currently owe the Suns their 2019 first-round pick, but the pick is unlikely to actually change hands in 2019 because of the protections on it (top-3 and 17-30). Phoenix would only get the selection if it falls between 4-16, which almost certainly won’t happen, given the Bucks’ success so far.

Assuming the Bucks keep it in 2019, the pick would roll over to 2020, at which point it will only be top-7 protected, making it far more likely to change hands.

The Bucks sent their 2021 first-round pick to Cleveland in Friday’s trade, but the Stepien rule prevents a scenario in which they’ve committed both their 2020 and 2021 first-rounders to other teams, unless they acquire another pick in one of those years. As such, the Cavaliers likely won’t get their hands on Milwaukee’s pick until 2022 at the earliest. According to protections reported by Zach Lowe of ESPN (Twitter link), it will be top-10 protected in that year.

The other draft picks in the trade:

Besides the Bucks first-rounder headed to Cleveland, there are four other draft picks involved in this deal. Two of them are simple:

The other two are a little more complicated:

Prior to Friday’s trade, the Bucks had just over $81MM in guaranteed money committed to eight players for the 2019/20 season. That doesn’t sound too bad, considering the cap is projected to be $109MM. However, it sounds a lot worse once you consider that the $81MM figure doesn’t include Khris Middleton, Eric Bledsoe, Malcolm Brogdon, or Brook Lopez, all of whom will be free agents next summer.

Milwaukee will have Bird rights for Middleton, Bledsoe, and Brogdon, and wouldn’t face any restrictions on re-signing any of those players besides their willingness to spend. But they won’t come cheap. Re-signing Middleton on his own would almost certainly eliminate the rest of the Bucks’ cap room, and Bledsoe and Brogdon will be seeking lucrative multiyear deals too. Lopez, meanwhile, would’ve been nearly impossible to re-sign, since the Bucks would only have his Non-Bird rights and no cap space to use on his probable raise.

By trading Henson and Dellavedova for Hill and Smith, the Bucks reduce their guaranteed 2019/20 commitments by more than $19MM — both Henson and Dellavedova had guaranteed salaries, while Hill only has a $1MM partial guarantee on his $18MM salary and Smith is on an expiring contract. In total, Milwaukee’s guaranteed money for next season is now down to about $62MM, creating a much more viable path to re-signing the players they want to — or even creating significant cap room if they can’t bring them all back.

The Bucks aren’t a big-market team and probably aren’t the kind of franchise that wants to find itself in luxury-tax territory. At the same time, they want to show Giannis Antetokounmpo they’re serious about winning, and letting key contributors walk because they couldn’t afford to pay them would have been a major red flag on that front. A future protected first-round pick is a very reasonable price to pay in order to create the added flexibility necessary to avoid that scenario.

The luxury tax ramifications for the Wizards:

The Wizards seemingly jumped into this deal late, as the first wave of reports suggested it was an agreement between the Cavs and Bucks. Washington’s involvement essentially amounted to giving up an extra second-round pick and cash in order to swap Smith for Dekker.

While Dekker is probably a better bet than Smith to contribute meaningful minutes for the 2018/19 Wizards, the deal appears to be primarily financially motivated for Washington.

We still don’t know exactly how much cash sent the Bucks as part of the trade, but let’s say it’s enough to cover the difference in Smith’s and Dekker’s salaries the rest of the way (about $1.88MM). That would mean the Wizards are, in essence, giving up a future second-round pick in order to upgrade from Smith to Dekker and save $4.71MM. That’s not a bad deal, given the usual cost of buying a second-rounder.

The Cavaliers’ next move:

When the Cavaliers sent Korver to the Jazz last month, they received a couple draft picks and took back Alec Burks, who is on an expiring contract. Based on that trade, it wasn’t clear how willing Cleveland would be to take on future salary. This three-team deal answers that question.

By acquiring Dellavedova and Henson in exchange for Hill and Dekker, the Cavaliers are essentially acknowledging that they don’t have plans to use their 2019 cap room. After all, the team now has $107,560,532 in guaranteed money on its books for 2019/20.

That willingness to surrender 2019 flexibility and look toward 2020 should serve the Cavs well as they explore the market for J.R. Smith. Smith’s production has declined and his $14.72MM cap hit for 2018/19 is exorbitant. However, his $15.68MM salary for next season is only guaranteed for $3.87MM, making it a pseudo-expiring contract, which should appeal more to teams looking to create flexibility for 2019.

As long as the Cavs can keep their 2019/20 salary projections below the tax line, which shouldn’t be an issue, there’s no reason for them not to take on more unwanted salary for next season. They’d still have flexibility for the 2020 offseason, and the more bad money they’re willing to take, the better chance they’ll have to snag another first-round pick or a young prospect.

Photos courtesy of USA Today Sports Images. Salary data from Basketball Insiders used in the creation of this post.