Grizzlies sharpshooter C.J. Miles has exercised the player option on his contract for the 2019/20 season, reports ESPN’s Adrian Wojnarowski (via Twitter). Miles had informed Peter Edmiston of The Athletic (Twitter link) on Thursday that he intended to opt in. 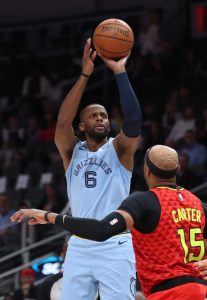 The decision locks in Miles’ $8,730,158 salary for next season, putting him on track to reach unrestricted free agency in 2020.

Miles’ decision doesn’t come as a surprise, since the 32-year-old struggled mightily in 2018/19, turning in his worst season in a decade. He’s also not healthy at the moment, having been ruled out for the season last month due to a stress reaction in his left foot.

The 14-year veteran, who started the season with the Raptors, was sent to the Grizzlies as part of the package for Marc Gasol in February. In total, Miles appeared in 53 games (16.2 MPG) for Memphis and Toronto, averaging just 6.4 PPG on .360/.330/.828 shooting. In his previous six seasons entering this year, he had averaged 11.2 PPG and shot 37.5% on three-pointers.

Depending on which direction the Grizzlies go this summer, it’s possible the club will look to move on from Miles via trade or buyout. If he returns to Memphis, the veteran swingman will look to compete for minutes on the wing.

With Miles’ $8.7MM+ salary locked in, the Grizzlies now have approximately $86.6MM in guaranteed money on their books for next season, per Basketball Insiders. Given that Jonas Valanciunas looks like a decent bet to pick up his $17.62MM player option as well, Memphis projects to be an over-the-cap team this offseason, barring cost-cutting moves.