8:00pm: Bazemore has officially picked up his option, per RealGM’s transactions log. 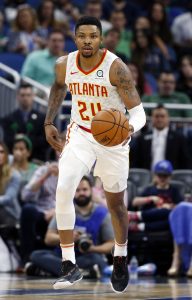 The 2019/20 season represents the final year of the four-year, $70MM contract Bazemore signed with Atlanta back in July of 2016. While he has been a solid contributor for the Hawks since then, he’s unlikely to ever see that sort of payday again as he prepares to enter his age-30 season.

Bazemore will look to bounce back next season – in advance of 2020 unrestricted free agency – as a role player on a young Hawks team that features up-and-comers like Trae Young, Kevin Huerter, and John Collins. Atlanta is in position to add two more young players to its core this June, as the team ranks fifth in the draft lottery order and also holds Dallas’ top-five protected first-round pick — the Mavs are tied for seventh in the lottery order entering today’s tiebreaker.

The Hawks will still have plenty of cap flexibility this summer, even after taking into account Bazemore’s $19MM+ salary. Outside of Bazemore and Miles Plumlee ($12.5MM), no one on Atlanta’s roster is on the books for more than $6.27MM in 2019/20, per Basketball Insiders.

Despite the fact that the 2018/19 season ended less than 48 hours ago, there have already been four veteran players who have exercised player options for next year or confirmed that they’ll do so. Bazemore joins Marvin Williams (Hornets), C.J. Miles (Grizzlies), and Jeff Teague (Timberwolves) in that group.