While the NBA won’t announce this year’s award winners until June, we’re making our picks for 2019’s major awards over the next two weeks.

We’re keeping things going today with the award for Coach of the Year. Here are our selections: 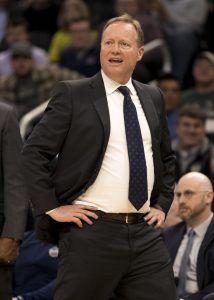 Austin Kent: Mike Budenholzer (Bucks)
While it certainly doesn’t hurt to have a top-five player evolve into a superstar, the Bucks benefited immensely from the excellent decision to hire Budenholzer, who took a good team propped up by its best player and morphed it into a well-oiled machine.

With Budenholzer at the helm, the Bucks increased their pace from 20th in the league to fifth. More impressively, they did so while also improving their defense. The Bucks were 18th in the league in defensive rating last season and first in 2018/19.

Suddenly, just one season removed from finishing as a 44-win squad and a relatively easy out, the Bucks are a 60-win behemoth and a legitimate title contender. Attribute some of that to the obvious strides Giannis Antetokounmpo took, but attribute the rest to the man that led the transformation from the sidelines.

Chris Crouse: Kenny Atkinson (Nets)
The Spurs were essentially forced to trade away Kawhi Leonard, and Gregg Popovich picked up the pieces and made the postseason. Doc Rivers took a Clippers team whose front office appeared to de-emphasize this campaign (perhaps as part of a plan to pursue Leonard this offseason) and improbably delivered the City of L.A.’s only playoff berth. Mike Budenholzer surveyed the Bucks’ roster and implemented a scheme that led Milwaukee to become the best team in the East.

None may be as impressive as Atkinson. The Atkinson-led Nets found their way to the postseason as a result of the coach’s on-court precision in play-calling and off-court player development. Several coaches deserve to be considered for the COY award, but Atkinson tops the field for his work in Brooklyn.

Arthur Hill: Mike Budenholzer (Bucks)
Budenholzer transformed the Bucks by emphasizing 3-pointers and defense, posting the league’s best record with a team that won 44 games last season. Antetokounmpo has taken a noticeable leap forward under Budenholzer, who has maximized the Greek Freak’s potential by surrounding him with shooters. Michael Malone, Kenny Atkinson, Steve Clifford and Doc Rivers all deserve consideration, but Budenholzer stands out for turning the Bucks into legitimate title contenders.

Luke Adams: Mike Budenholzer (Bucks)
In a crowded field of Coach of the Year candidates for 2018/19, Budenholzer wasn’t necessarily the one who did the most with the least, but he had a major hand in the Bucks‘ breakthrough season. Even those of us that were high on Milwaukee entering the season didn’t expect this — the team’s 60 wins were an NBA high, and its +8.6 net rating was the best mark since the 2016/17 Warriors.

Although much was made of Budenholzer’s ability to unlock the Bucks’ offensive potential by spacing the floor around Antetokounmpo with shooters, his work on the other end of the court impressed me more. Milwaukee ranked 18th in the league in defensive rating in 2017/18, and its offseason additions – including Brook Lopez and Ersan Ilyasova – weren’t exactly All-Defense contenders. The Bucks were nonetheless the hardest team to score on at the rim in 2018/19 despite rarely fouling, and improved their overall defensive rating to a league-best 104.9.

Dana Gauruder: Doc Rivers (Clippers)
Stripped of his title as president of basketball operations a couple years ago, Rivers was able to fully concentrate on what he does best. He did a masterful job of massaging victories out of an ever-changing roster. The Clippers won 48 games despite trading their top scorer (Tobias Harris) at the deadline. They also changed centers and shooting guards in mid-stream and had a rookie point guard running the show. Yet they got better as they went along, going 18-8 after the first week of February.

Who is your pick for Coach of the Year? Share your choices and your thoughts in the comment section below!