Every week, Hoops Rumors takes a closer look at players who will be free agents or could become free agents next offseason. We examine if their stock is rising or falling due to performance and other factors. This week, we take a look at some of the players currently in the conference finals:

DeMarcus Cousins, Warriors, 28, C (Down) — Signed to a one-year, $5.3MM deal in 2018
Cousins made a snap decision on the second day of free agency last July to bet on himself and chase a ring. There’s a very good chance he’ll get the latter; as for landing a big multi-year contract this summer, that’s a major question mark. He’s unlikely to play against Portland due to the quad injury he suffered in the opening round. There’s no guarantee he’d be back for the Finals. Cousins played well after returning from his one-year rehab for an Achilles tear but it’s fair to question whether the injuries will continue to pile up for the big man. 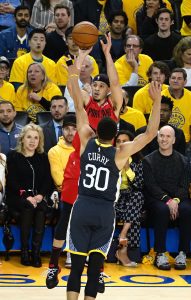 Seth Curry, Trail Blazers, 28, SG (Up) — Signed to a one-year, $2.8MM deal in 2018
Seeing the Curry brothers go at each other has added to the entertainment value of the conference finals. Seth didn’t fare so well in Game 1 (three points on 1-for-7 shooting) but he was a major factor in Game 2 with 16 points, including four 3-pointers, and four steals. After missing all of last season with a left leg injury, the less-heralded Curry has proven to be a valuable rotation player. The Pistons reportedly have him high on their list of free agent targets. They certainly won’t be alone — career 43.9% 3-point shooters tend to attract a crowd.

Marc Gasol, Raptors, 34, C (Down) – Signed to a five-year, $113.2MM deal in 2015
Gasol said earlier this month he’s undecided whether to exercise his $25.6MM player option. At this stage of his career, Gasol is probably more focused on being a good fit and feeling comfortable than his bank account. But he’d be losing many millions if he doesn’t opt in. Quite frankly, he’s no longer a $25MM player. More than half of his field-goal attempts in the playoffs have come from beyond the arc and he’s not making them. He shot 26.9% from deep against the Sixers in the conference semis and went 2-for-7 in Game 1 against the Bucks. He’s scored in single digits in 10 of 13 games this postseason.

Brook Lopez, Bucks, 31, C (Up) – Signed to a one-year, $3.4MM deal in 2018
Following a series of forgettable conference semifinal outings, Lopez blew up in Game 1 against Toronto. He piled up 29 points, 11 rebounds and four blocks to carry the Bucks to an early lead in the series. Lopez was arguably the biggest bargain in free agency last summer. He was an ideal fit for the Bucks’ high-powered attack as a ‘stretch five.’ His advanced defensive numbers this season were the best of his career. Milwaukee has other free agency concerns, most notably Khris Middleton, but re-signing Lopez should be a high priority as well.