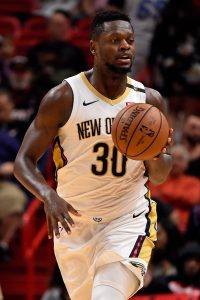 Chris Haynes of Yahoo! Sports tweets that the final year of the pact contains a team option, while Steve Popper of Newsday (Twitter link) classifies it as a partial guarantee.

Rumors of the Knicks’ interest in Randle sprouted once the Pelicans landed Zion Williamson and it became clear that New Orleans wasn’t likely to compete for the big man’s services. Those rumors continued in the week leading up to free agency.

New York is expected to have $51M in cap room after the agreement, per ESPN’s Bobby Marks (Twitter link). It’s unclear if which players they are targeting with their cap space. The Knicks missed out on their top target in Kevin Durant, watching the former MVP sign with the crosstown Knicks. Kyrie Irving is also headed to Brooklyn.

Randle had a breakout season during his lone year in New Orleans. He notched career-highs in points per game (21.4), 3-pointers made (nearly one per contest), and player efficiency rating (21.0).