7:00pm: The Blazers and McCollum have made it official, with the team issuing a press release to announce the extension. 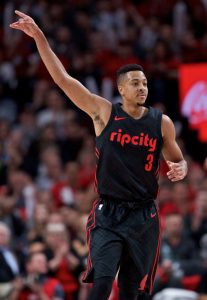 “CJ McCollum is a franchise cornerstone and a critical part of our future,” Neil Olshey said in a statement. “This extension represents a strong level of commitment between CJ, the Trail Blazers and the city of Portland.”

1:01pm: The Trail Blazers and guard CJ McCollum have reached an agreement on a contract extension that will add three years to his current deal, agent Sam Goldfeder of Excel Sports tells ESPN’s Adrian Wojnarowski (via Twitter).

According to Wojnarowski, the two sides have agreed to a three-year, $100MM extension that will keep McCollum under contract for the next five seasons in total — he has two years left on his current deal. Assuming the extension doesn’t feature any options, it will put the 27-year-old on track to reach unrestricted free agency in 2024.

Because McCollum signed his current contract with Portland on July 27, 2016, he became eligible for an extension on Saturday, three years after that deal was completed. The two sides didn’t waste much time in working something out, though the new contract won’t go into effect until the 2021/22 season.

While three years was the most that McCollum and the Blazers could have tacked onto to his current deal, it’s not technically a maximum-salary extension. The standout shooting guard could have earned up to approximately $114MM on that three-year extension, so he’ll accept slightly less than that in exchange for long-term security.

McCollum’s extension will make him the fifth player to sign a contract extension this offseason, as well as the third player to ink a veteran extension. Most notably, he’s the second member of the Blazers’ backcourt to agree to a lucrative long-term extension this summer — the team locked up Damian Lillard to a four-year, super-max extension earlier this month.

Lillard’s extension begins in ’21/22, the same year as McCollum’s. It runs one year longer, but Portland is now assured of having its two star guards under contract for least the next five seasons.