JULY 17: The Celtics have officially signed Kanter, the team announced today (via Twitter).

JULY 1: The Celtics have agreed to terms with free agent center Enes Kanter on a two-year deal with a second-year player option, his manager Hank Fetic announced today (via Twitter). According to Ian Begley of SNY.tv (via Twitter), Kanter’s new contract will be worth nearly $10MM, so it projects to fit into Boston’s room exception. 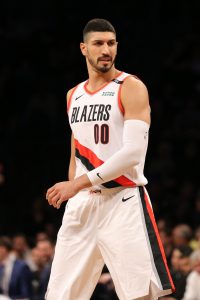 Kanter, 27, has spent time with the Jazz, Thunder, Knicks, and Trail Blazers since entering the league as the third overall pick in the 2011 draft. Last season, he was bought out with the Knicks in February and signed in Portland for the rest of the season. In 67 total games, he averaged 13.7 PPG and 9.8 RPG in 24.5 minutes per contest.

Kanter boosted his stock down the stretch by taking over as the Blazers’ starting center after Jusuf Nurkic broke his leg. Kanter averaged 11.4 PPG and 9.7 RPG in 16 postseason contests. Portland agreed to acquire Hassan Whiteside in a trade with Miami earlier today, signaling that the club didn’t expect to bring back Kanter.

Having agree to acquire Kemba Walker using their cap room, the Celtics had been on the lookout for a big man with their $4.8MM room exception. They were linked to Kanter and Kevon Looney on Saturday, though Looney’s agent tells Mark Murphy of The Boston Herald (Twitter link) that he didn’t hear from the C’s.

While Kanter will help improve the Celtics’ interior scoring and rebounding numbers, he’s not considered an elite defender, so the team will have some work to do in its frontcourt to make up for the departures of Al Horford and Aron Baynes.