Note: This post was updated in February 2020 to reflect the NBA’s latest cap projection for 2020/21.

One of the most lucrative new deals agreed up on this week was a five-year, maximum-salary contract extension for Nuggets guard Jamal Murray. Ben Simmons is expected to soon finalize a similar extension with the Sixers. Those deals were reported as having total values of $170MM apiece, but that number is just an estimate for now. 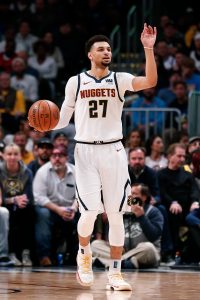 Because Murray’s new contract won’t go into effect until the 2020/21 season and the NBA won’t finalize the ’20/21 salary cap until the start of next year’s free agency, we can only ballpark what maximum-salary contracts will look like based on the NBA’s latest cap projections.

When the NBA confirmed its salary cap data for the 2019/20 season on June 29, the league also updated its cap estimates for the following two years. The current projection for the 2020/21 cap is $117MM, though that number could fluctuate over the course of the next 12 months or so.

[UPDATE: It has fluctuated multiple times since then — a September projection put the 2020/21 estimate at $116MM, while a January update moved it to $115MM]

Here are the the early max-salary projections for 2020/21:

The “6 years or less” column here is what Murray’s and Simmons’ new extensions would look like, assuming those deals don’t meet certain Rose Rule triggers.

The second column reflects what a player like Anthony Davis could get if he re-signs with his own team as a free agent next summer.

The third column applies not just to players with 10+ years of experience, but also to players who meet the Designated Veteran Extension criteria (Davis would have been eligible for that amount if he had signed an extension with the Pelicans).

If a player changes teams as a free agent, he doesn’t have access to a fifth year or 8% raises. So if Murray had opted to sign an offer sheet next summer, he would have been limited to a four-year deal projected to be worth just shy of $124MM.

If Davis or another veteran with between seven and nine years of NBA experience wants to change teams in 2019, he would be limited to a contract worth less than $150MM.