11:59pm: Jones officially signed the offer sheet on Sunday, according to RealGM’s transactions log. Minnesota will have two days to match it.

10:51pm: The Grizzlies have agreed to terms on an offer sheet with restricted free agent point guard Tyus Jones, reports Shams Charania of The Athletic (Twitter link). Once Jones formally signs the Grizzlies’ offer sheet and it’s presented to the Timberwolves, Minnesota will have two days to match it. 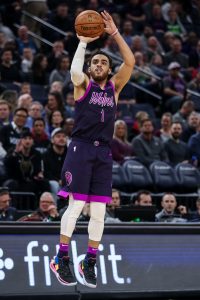 According to Charnia (via Twitter), the 23-year-old’s offer sheet is worth $24MM over three years. Malika Andrews of ESPN (via Twitter) pegs the value at $28MM, with agent Kevin Bradbury confirming to Jon Krawczynski of The Athletic (Twitter link) that $28MM is the deal’s maximum value via incentives. Bradbury also tells Krawczynski that he and Jones looked elsewhere on the free agent market after they couldn’t find common ground with the Wolves.

“We negotiated in good faith with Minnesota, but did not receive an offer I felt was fair so we had to look elsewhere,” Bradbury said.

The Grizzlies lost a restricted free agent point guard of their own today, having reached an agreement with the Mavericks to send Delon Wright to Dallas in a sign-and-trade in exchange for a pair of second-round picks. That deal left Memphis with little point guard depth beyond Ja Morant and De’Anthony Melton, so it looks like the team will try to add a replacement for Wright on a similar contract after acquiring a couple draft picks in the process.

It remains to be seen whether the Timberwolves will match Memphis’ offer. The Wolves entered the offseason reportedly in the market for a point guard, but selected Jarrett Culver in the draft, then missed out on top target D’Angelo Russell. As a result, Shabazz Napier is currently the only point guard on the depth chart behind Jeff Teague, and it’s not clear if Minnesota even plans to keep Napier for the regular season.

The Wolves’ lack of depth would seemingly make them inclined to match Jones’ offer sheet, but as ESPN’s Bobby Marks observes (via Twitter), doing so would only leave them about $1MM below the luxury tax line, reducing their flexibility for the rest of the offseason (and regular season).