JULY 11: The Hawks have officially signed Parker, the team confirmed today in a press release. 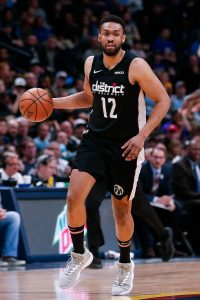 “Jabari is a highly skilled offensive player and proven scorer, and we’re looking forward to incorporating him into our group,” Hawks GM Travis Schlenk said in a statement. “We think he will fit well on the court and in the locker room, and we’re excited to welcome him to Atlanta.”

JULY 8: The Hawks and forward Jabari Parker have agreed to terms on a two-year contract, his agency Priority Sports announced today (via Twitter). According to Shams Charania of The Athletic (via Twitter), the two-year pact will be worth $13MM, with a second-year player option.

The No. 2 overall pick in the 2014 draft, Parker averaged 20.1 PPG in 51 games with the Bucks in 2016/17. However, that season ended early due to a torn ACL and the 24-year-old hasn’t made the same impact since then for Milwaukee, Chicago, and Washington.

Last year, Parker signed a two-year, $40MM contract with the Bulls, which featured a second-year team option. He was traded to the Wizards in a deadline deal and averaged 14.5 PPG, 6.6 RPG, and 2.4 APG on .493/.313/.712 shooting in 64 total games for the two teams. Washington turned down his 2019/20 option, allowing him to reach the open market as an unrestricted free agent.

It took Parker more than a week to find a new home, which made him a match for the Hawks, whose GM Travis Schlenk had stated this spring that the club would likely wait out the first wave of free agency to see who slipped through the cracks. Parker, the only unrestricted free agent still on the board from our top-50 list, fit that bill. He could become a starting forward in Atlanta, though he may slot in better as a second-unit scorer.

The Hawks were one of the few NBA teams with cap room still available, so no exception will be required to sign Parker. They still project to have about $6.2MM in space left after the signing, per Jeff Siegel of Early Bird Rights (Twitter link).