JULY 16: Morris has officially signed with the Knicks, per NBA.com’s transactions log.

JULY 11: The Knicks have agreed to a one-year, $15MM deal with Marcus Morris, Shams Charania of The Athletic reports (Twitter link). Morris had previously come to an agreement with the Spurs but chose not to honor the verbal agreement. 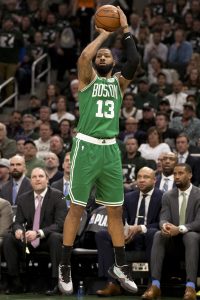 San Antonio was planning on using its mid-level exception to sign Morris and turned its DeMarre Carroll acquisition into a sign-and-trade in order to accommodate Morris on a two-year deal worth approximately $19MM. The Spurs traded away Davis Bertans as part of the Carroll sign-and-trade.

“I had to make this decision based on the best situation for me and my family,” Morris said (via Charania). “This is no knock on the Spurs. I have respect for them.”

New York had the flexibility to add Morris after renegotiating its deal with Reggie Bullock. Bullock agreed to terms with the Knicks on a two-year, $21MM pact, but the franchise nixed that deal over health concerns. Ian Begley of SNY.tv tweets that New York plans to amend the agreement with Bullock.

Morris, who earned the No. 22 spot on our list of this offseason’s top 50 free agents, was the most notable name still on the board. The 29-year-old had a solid year in Boston as the Celtics’ primary starting forward in 2018/19, averaging 13.9 PPG, 6.1 RPG, and 1.5 APG with a .447/.375/.844 shooting line. He’ll join a Knicks frontcourt that also features newly-added veterans like Bobby Portis, Julius Randle, and Taj Gibson in addition to incumbent youngsters Mitchell Robinson and Kevin Knox.

The move to sign Morris exhausts New York’s cap room. The team has the room exception available to sign Bullock or another free agent.