JULY 10: The Mavericks have officially re-signed Kleber, per a team release. 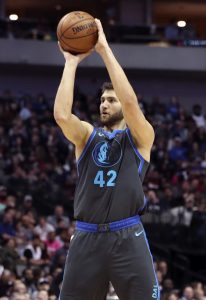 The fact that Dallas has made this deal official signals that the club plans to function as an over-the-cap team, forfeiting potential cap room. That will allow Dallas to keep a trade exception worth about $12MM for a possible move down the road, as we detailed in a story earlier today.

JULY 1: The Mavericks have agreed to terms with restricted free agent forward Maxi Kleber, according to Marc Stein of The New York Times, who reports (via Twitter) that Kleber will sign a four-year, $35MM deal.

Tim MacMahon of ESPN.com (Twitter links) pegs the value at $33MM, but says it can be worth up to $35.9MM via incentives. The fourth year of Kleber’s new contract will be a team option, according to Stein (via Twitter).

Kleber’s raise won’t impact the Mavs’ ability to continue building their roster. Because he has a very modest cap hold of about $1.82MM, Dallas can keep that hold on its books to maximize its cap flexibility before going over the cap to sign him using his Early Bird rights.

This is the second four-year contract agreement of the day for the Mavs, who struck a similar deal with free agent guard Seth Curry.