JULY 6: The Magic have officially re-signed Vucevic, the team confirmed today in a press release. The club also announced its deals with Terrence Ross and Al-Farouq Aminu.

JUNE 29: All-Star center Nikola Vucevic will stay in Orlando on a four-year, $100MM contract, tweets Shams Charania of The Athletic. 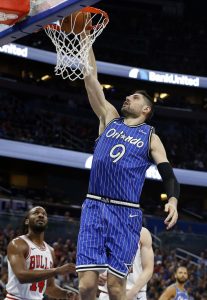 The deal will enable the Magic to keep one of the primary cogs of their playoff team in place for what should be the best part of his career. The 28-year-old posted career highs this season with 20.8 points and 12.0 rebounds per night. He also improved as a 3-point shooter, sinking 1.1 per game and hitting them at a .364 clip.

Vucevic was among the biggest bargains in the league this year, putting up All-Star numbers at a salary of $12.25MM. He has blossomed into an elite NBA center since being acquired from the Sixers in a four-team trade in 2012.

The signing is bad news for teams seeking center help in free agency, such as the Kings and Mavericks. The Celtics were also rumored to be interested in Vucevic before committing their cap room to Kemba Walker.