JULY 31: The Pacers have signed Holiday, the team confirmed today (via Twitter). Now that the deal is complete, Indiana is officially over the cap. 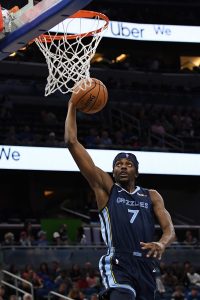 JULY 19: One of the most notable veteran free agents still on the market has reached a deal, according to Shams Charania of The Athletic (Twitter link), who reports that swingman Justin Holiday is signing a one-year, $4.8MM contract with the Pacers.

Holiday, 30, appeared in 82 total games last season for the Bulls and Grizzlies, averaging 10.5 PPG, 3.9 RPG, and 1.5 SPG in 31.8 minutes per contest. With most starting-caliber free agents off the board, Holiday was one of the only veterans left who appeared likely to sign for more than the minimum.

In Indiana, it appears he’ll receive the team’s room exception, which is worth $4.767MM. With Victor Oladipo not expected to be ready for the start of the regular season Holiday should get a chance to play plenty of minutes at the two in the early going.

Even after Oladipo returns, Holiday is on track to play a regular role on the wing for the Pacers, alongside players like newly-added swingman Jeremy Lamb and forwards T.J. Warren and Doug McDermott.

Joining the Pacers will also give Holiday the opportunity to unite with younger brother Aaron Holiday, who should have an increased role in Indiana’s backcourt. It will be the first time since the 2012/13 season, when Justin briefly played with Jrue Holiday in Philadelphia, that two of the Holiday brothers have been on the same roster.