JULY 18: The deal between Chandler and Houston is now official, per a release from the team. 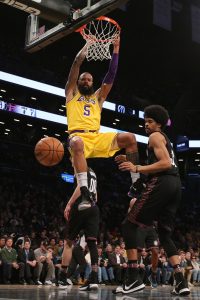 Specific financial terms on the deal aren’t yet known. Houston is using part of its mid-level exception to bring back Danuel House, but could offer some of it to Chandler as well. A minimum-salary arrangement is also a possibility — because he has 10 years of NBA experience, Chandler would earn $2,564,753 on a minimum deal.

Chandler, who agreed to a buyout with the Suns early in the 2018/19 season, signed a one-year, minimum-salary contract with the Lakers and helped shore up the team’s front line, averaging 3.1 PPG and 5.6 RPG in 48 games (16.4 MPG) for Los Angeles. He indicated at season’s end that he planned on playing just one more year in the NBA, though he took some extra time this offseason to consider whether to return, per Jonathan Feigen of The Houston Chronicle (Twitter link).

Houston’s interest in Chandler, which was previously reported, stems in part from head coach Mike D’Antoni‘s familiarity with the big man. According to Tim MacMahon of ESPN (Twitter link), D’Antoni strongly advocated bringing Chandler to Houston. ESPN’s Adrian Wojnarowski adds (via Twitter) that the Rockets had recruited the 18-year veteran for weeks, noting that the acquisition of Russell Westbrook may have played a part in Chandler’s commitment.

Although Clint Capela‘s name was mentioned frequently in trade rumors this summer, the Rockets view Chandler as a replacement for Nene rather than Capela. The 36-year-old will slot in as Capela’s backup at the five.

According to MacMahon, the Rockets believe Chandler still has enough left in the tank to be a lob threat on offense and to provide the team’s second unit with reliable defense and rebounding.