JULY 11: Now that the Sixers’ other major signings are complete, the team has formally announced Scott’s new deal, which will utilize the room exception. 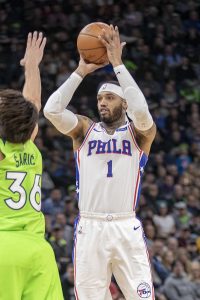 “Mike epitomizes what Philadelphia loves – a fierce competitor with a tireless work ethic, who’s driven by the desire to win,” GM Elton Brand said in a statement. “His toughness, grit and passion are palpable, as the city of Philadelphia has come to know. We are thrilled to have Mike back with the 76ers.”

JUNE 30: The Sixers have agreed to a two-year, $9.8MM deal with free agent Mike Scott, according to Shams Charania of The Athletic (Twitter link). The deal features no options, tweets Derek Bodner of The Athletic.

Scott, a key player off the Sixers’ bench last season, will continue to provide production in the frontcourt for the team. He shot a scorching 41 percent from deep in his 27 games with Philadelphia, averaging a steady 7.8 points per contest.

In addition to Scott, Horford and Richardson, Philadelphia also reached a deal with Tobias Harris to keep him in town, committing four years and $180MM.